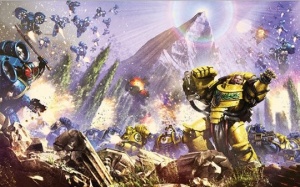 The Pharos atop its mountain during the Battle of Sotha

The Pharos is a pre-Imperial piece of Necron[5c] technology that is able to harness empathy to allow the user to find, communicate, or even teleport to a location they either consciously or subconsciously desired, without the use of the Warp. Instead of routing through the Warp, it connected two points directly within the Materium via quantum entanglement.[1][5c] It could also secondarily aid in Warp travel, being used to navigate the Warp much like the Astronomican, except while the Astronomican utilized psychic power to provide a reference point and acted as a "lighthouse" in the Warp; the Pharos utilized empathic energies and would illuminate the needed location, making it appear as a comparative "lantern", which would provide a path to where a ship needed to go. Due to using empathic power, instead of psychic, the Pharos' function was completely unhindered by Warp storms.[3]

Built from Blackstone[5b], the Pharos array was originally constructed by the Necrons for rapid communications and FTL travel. The Pharos is powered by eight C'tan Shards, one of which is Zarhulash.[5d] When the Necrons emerged into their great slumber, the array went inactive. By the Age of the Imperium the only known surviving Pharos was on Sotha. Belisarius Cawl states that he found another Pharos elsewhere, but it was long destroyed. Like most other Necron Blackstone technology, the Pharos is able to negate the effects and presence of the Warp.[5c]

The Pharos was discovered by Humanity on Sotha by Barabas Dantioch during the Horus Heresy and used by Roboute Guilliman as a beacon to attract scattered loyalist forces to his new empire, Imperium Secundus.[1] The Pharos became the subject of battle when the Night Lords under Krukesh discovered the nature of the device and became determined to claim it in order to find the Nightfall and Konrad Curze. In the ensuing Battle of Sotha, Dantioch overloaded the Device to defeat the traitors and its engines fell silent for the first time. Unknown to all involved, this act served to alert the Tyranids to our Galaxy.[2]

After the Heresy, Guilliman ordered the Pharos destroyed - removing thousands of tonnes of xenos machinery from the mountain and filling its tunnels with millions of tonnes of ferrocrete. The primarch appointed Oberdeii as Warden of the Pharos and Captain of the Aegida Company, sworn to protect Sotha from whatever secrets had been buried in the Pharos. This duty passed to 199th Company of Ultramarines, now their own chapter and renamed the Scythes of the Emperor after the Third Founding.[4]

Despite the attempts to dismantle the Pharos, the Necron technology of the Pharos activated its self-repair functions and quietly the Pharos facility rebuilt itself. Millennia later, the formation of the Great Rift reactivated the now fully repaired and operational Pharos, which was noted by the now-reborn Scythes of the Emperor. Archmagos Belisarius Cawl led an expedition to study and perhaps use the Pharos to close the Rift and defeat Chaos.[5b] Ultimately during Cawl's experiments he discovered that the device's core, a singularity, and it's datacore, were both being contained by an enslaved C'tan shard of Zarhulash. Cawl tricked the shard into destabilizing the device's singularity, before using the Pharos to teleport the shard to an unknown distant star system. The destabilized singularity then began to collapse into a blackhole. However, Cawl was able to escape with the data stored within the Pharos, including the location of other Pharos and Blackstone deposits across the Galaxy. The Pharos device itself was destroyed by an Ultramarines strike cruiser before the destabilization could create a blackhole.[5e]

A Pharos is a Necron device which allows the Necrons to travel faster than light and communicate over interstellar distances without relying upon the warp. In general terms, it is described as a Quantum Empahtic Resonance Beacon. These beacons, such the one upon Mount Pharos, are believed to each contain an entangled supermass of isolated particles that are perfectly in tune with each other. These devices exploit the fundamental laws of physics to connect multiple parts of reality together.[5c] The beacon within Mount Pharos was powered by C'tan Shards.[5d] When activated, the device creates a portal to a distant location in space that is keyed to the mind of its user.[5e] The beacon within Mount Pharos is only one of hundreds of similar devices (Pharoses), which form a network throughout the galaxy.[5d]

Besides its ability to act as an interstellar communication and travel device, each beacon is capable of tuning one's energetic state with their past emanations. In the case of Belisarius Cawl, it allowed him to experience the pasts of his constituent minds, despite his dominant personality never recollecting them.[5a] Within the Pharos beacon, this phenomenon has been referenced in tales of "mountain dreaming", wherein one experiences visions of their past and the pasts of others.[5c]

In ancient history, the Pharos of Alexandria, Egypt was an immense lighthouse of its time and one of the seven wonders of the ancient world