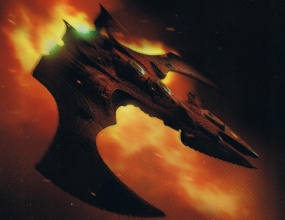 The Phoenix is an Eldar ground attack fighter. While it shares many features in common with its smaller cousin, the Nightwing, the Phoenix sacrifices a measure of speed and maneuverability in order to carry a large weapons payload for ground attack missions. The two work in tandem, Nightwings clearing the skies of enemy aircraft and escorting Phoenixes as they rain destruction upon ground forces. However despite its loss in performance the Phoenix is still an outstanding aircraft, capable of tangling with most Imperial fighter aircraft and still coming out on top. It is common throughout all Craftworlds and Corsair warbands, and while orbital-capable the Phoenix is more commonly deployed through larger Wraithgates.[1][2][3][4] 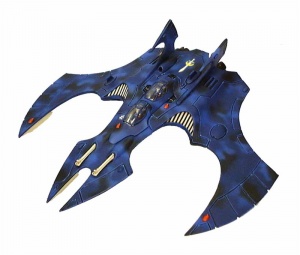 The Phoenix is a heavily-armed aircraft. A pair of twin-linked Shuriken Cannons mounted in the craft's nose are primarily for engaging other aircraft or infantry units, while below the fuselage is a single centerline-mounted Pulse Laser for pinpoint accuracy against hardened ground targets. The Phoenix's main ground attack weapons, twin Phoenix Missile Launchers, can also be mounted in the fuselage or in wing mounts. They typically carry plasma missiles for saturation bombardment of a target, destroying it in a hail of plasma explosions, but may also mount Krak Missiles.[1][3][4] Alternatively, some Phoenix bombers will instead carry the same deadly Monofilament Weaponry as found on the ground-based Night Spinner in place of missile launchers.[2]

Unlike the Nightwing the Phoenix has a crew of two, a pilot and co-pilot, each with their own cockpit. The co-pilot serves as a weapons officer, operating the Phoenix's armaments whilst the pilot flys the aircraft. Control of the Phoenix is assisted by the fact that, like all Eldar aircraft, it is constructed of advanced psycho-plastics and Wraithbone, psychically attuned to the crew and allowing for improved response times and pilot efficiency.[4]

As with other Eldar vehicles, the Phoenix focuses on speed and agility rather than heavy armour for protection, and benefits from an advanced Holo-field to disrupt enemy targeting capabilities. Wraithbone reinforcements along the craft's fuselage further help to strengthen and give extra resilience.[4]

The Phoenix lacks the same straight-line speed and maneuverability as the Nightwing, in part because it does not use the same variable-sweep wings, and has been recorded achieving a max speed of only 3,100 kph by Imperial forces. However it still makes use of the same advanced anti-gravitic technology, and so is more than capable of outperforming most other aircraft in both speed and agility.[1][3]