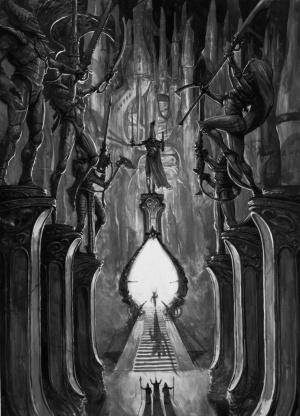 A shrine to the Aspect Phoenix Lords.[3]

The Phoenix Lords are amongst the most ancient and renowned heroes of the Eldar race.[1a] Should they be vanquished, their essence will lie dormant inside their armor until it is donned by another Eldar warrior whose soul resonates. Should they prove worthy enough to combine souls, the Phoenix Lord will be reborn in a new body.[6]

The Phoenix lords are Exarchs so ancient that they have no shrines and no Craftworlds to call home. They wander from world to world, instinctively driven by war, attracted by intuitive power to places of great danger and need. During moments of desperation they appear, sometimes alone but often several together, depending upon the perils faced. Using the Eldar Webway they move from Craftworld to Craftworld and from planet to planet, following in the path of the Bloody-handed God.[1a]

The Phoenix Lords are immortal, after a fashion. When a Phoenix Lord is slain in battle, his place is taken by another Eldar who assumes his costume and identity. In this way the Phoenix Lord is reborn into a fresh cycle of existence. His suit includes a spirit stone which contains the spirits of all the Eldar who have become that Phoenix Lord. Yet, no matter how many different individuals a Phoenix Lord may have been, his mind is forever the same, driven by the dominant personality of the first and greatest warrior to wear the suit.[1b]

The names of the Phoenix Lords are well known throughout the Craftworlds, and their deeds form part of the legends of the Eldar. No one knows exactly how many Phoenix Lords there are, for some are seen but rarely, while others disappear for millennia only to reappear suddenly and unexpectedly. Some have undoubtedly perished far away, their suits lying upon some hostile world awaiting discovery by some predestined Aspect Warrior doomed to don the armour and become the ancient hero for another cycle of his existence.[1a]

It is said that the Phoenix Lords will fight at the Rhana Dandra — the final battle between Chaos and the material universe.[1c]

The Warp Spiders Aspect do not have a known Phoenix Lord. However, some claim that the "Wraith Spider" (Lhykosidae), a similar person on the Kaelor Craftworld, is in fact the Phoenix Lord of the Warp Spiders. Others disagree with this due to the tendency of the Phoenix Lords to appear far earlier in history to help found their aspect.[4]