Pintle weapons are extra weapons mounted on the top of Imperial and Chaos Space Marine vehicles. 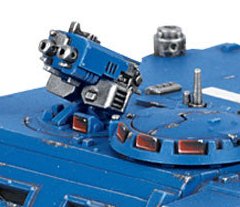 The Pintle-mounted Storm Bolter may be fired from an open top or remotely from inside the vehicle. They are treated as an extra defensive weapon.

Used by Chaos only, the Combi-Bolter is an old design, usually consisting of two Bolters strapped together. The Combi-Bolter can be upgraded to either a Combi-Flamer or Combi-Melta. They may only be mounted on vehicles, not Dreadnoughts or Defilers and only one may be attached to any one vehicle.