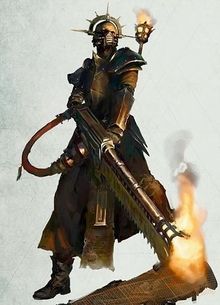 Pious Vorne, also known as Vhorne the Pious[3] is a Missionary zealot who has joined with a group of explorers searching for a new Blackstone Fortress that has appeared in the galaxy.[1]

Once a hive ganger on the world of Gethsemane, Vorne became a zealous servant of the Emperor after observing Taddeus the Purifier burn heretic rebels on her world. Vorne saved Taddeus' life after one of the condemned heretics escaped from his chains, and thereafter served the Priest. Thereafter she became known as "the Pious" and was gifted with a Flamer.[3] Vorne has a pathological love of incendiary execution and seeks to slay any heretics who see the Blackstone Fortress as a refuge from the Emperor’s light.[2]

She later became part of Janus Draik's expedition to the Seventh Blackstone Fortress.[1] 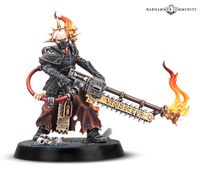