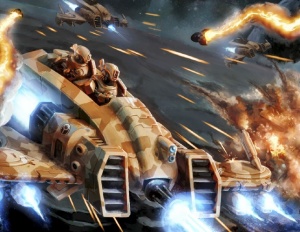 The TX4 Piranha Skimmer is a lightweight craft[5] which is comparable in both size and battlefield roles to a Space Marine Land Speeder.[Needs Citation]

Firstly the Piranhas were introducted during the Second Sphere Expansion.[5] The Piranha was originally documented on the planet of Dal'yth, circa 884.M41, during a diplomatic mission, where it was originally seen being used in a civilian role transporting important dignitaries; it can be presumed that the Piranha was later developed for a military role, or that there are numerous variants of the vehicle used throughout the class system. The Piranha would see its first combat use during the Taros Campaign, where it operated in a reconnaissance or fire support role Tau Pathfinder teams.[3] One of their tactics - to close swiftly on the Pathfinders’ forward positions, and taking advantage of the targeting data transfered to them by the scouts’ markerlights, appears as if from nowhere and destroying the enemy. In this sudden ambush enemy infantry and armour that believed themselves in a short time wiping out by Pathfinders are instead annihilated by the blistering explosions of the Piranha's weapons systems.[5]

Since the Second Sphere Expansion Piranha has served in a number of roles, from base security to battlefield transport for high-ranking dignitaries. Piranhas will typically operate in teams of one to five vehicles.[1][3]

Those who successfully graduate the Piranha training programs enjoy enhanced status amongst their Fire Caste comrades, though places within the program are highly contested. Piranha's pilots are trained to rely heavily on their instincts and allowed considerable operational flexibility in the battle.[5]

The most common armament for the Piranha is a chin-mounted burst cannon and two detachable Gun Drones, similar to the Devilfish troop carrier. However, the Piranha is often armed with a pair of Seeker Missiles in order to provide fire support for Markerlight-equipped troops and vehicles, and will replace its burst cannon with a fusion blaster for anti-armour missions. In addition, the Piranha can be upgraded with a number of additional vehicle upgrades.[Needs Citation] 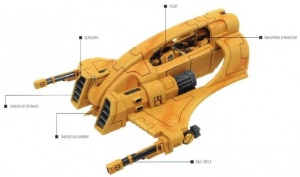 The TX-42 is the latest development of the successful Piranha light skimmer. It has a re-worked crew compartment and upgraded armament to turn the light Piranha into a heavier gunship, designed for frontline operations in support of Tau armoured units.[Needs Citation]

It can be equipped with twin-linked rail rifles, twin-linked missile pods, twin-linked fusion blasters or twin-linked plasma rifles. The chin-mounted weapon in a standard piranha skimmer is replaced with a markerlight. The TX-42 also has heavier armour.[2]