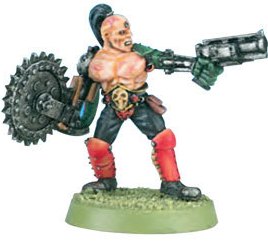 Necromundan Pit Slave armed with a Buzz Saw and a Stubgun.

A toothed disk of razor-sharp steel, the Buzz Saw revolves at a high velocity in order to maximize its cutting power. Traditionally they have been grafted onto the arms of Scrap Slaves on the Hive Worlds to help them carry out the work of breaking down the detritus of society into more salvageable smaller parts.[1]

More underhanded businessmen have attached them to the arms of Pit Fighters where they make ruthlessly efficient killing tools in the gladiatorial arenas that can be found all too often in the less savoury areas of Hive Worlds such as Necromunda.[1]