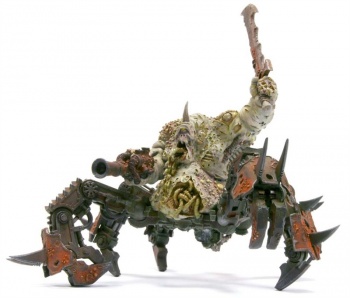 A Plague Hulk by Forge World[2]

The Plague Hulk is a Daemon Engine of Nurgle. It closely resembles the Soul Grinder, but with a more bloated, decayed appearance - as befitting a machine of the Plague Lord.[1]

Plague Hulks appear to be a direct hybrid of machine and Nurgle daemon and is said to be sickly to look upon. The chassis of the machine supports a maggot-ridden mass of daemonic flesh, at the center of which sits a maw capable of vomiting a tide of filth that can rot flesh and corrode metal. Additional weapons include an arm-fused Rot Cannon and an over-sized Plague Sword. Like many other Daemon Engines, these monstrosities also possess massively powerful limbs which can smash through the strongest armor. Worse still, any unfortunate victim that gets too close to a Plague Hulk must endure clouds of flesh-searing poison.[1]