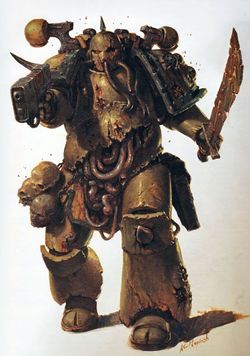 Within their corpulent and disgusting armour their bodies are bloated with disease, swollen with corruption and rank with decay. Their weaponry and equipment may be pitted with decay and corroding away, but they are still terrifying opponents. They have an inhuman tolerance for pain, enduring injuries that would cripple other Marines, their nerves dulled by disease or even partly rotted away.[Needs Citation]

Plague Marines normally appear armed with some manner of boltgun with which they unleash a steady rain of firepower, but may carry other weapons. They also often arm themselves with some form of close-combat blade that can communicate Nurgle's Rot to the victim.[1] 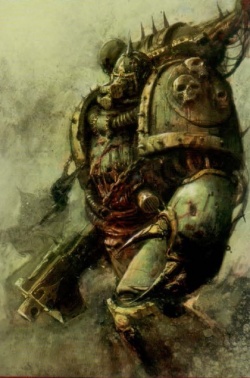 The first Plague Marines were members of the Death Guard during the Horus Heresy. Horus planned for the Death Guard to form part of the invasion force he would lead to attack Terra. Determined to join the Warmaster’s siege of the Imperial Palace, Mortarion led his fleet into the Warp. He did not know that he was entering an eternal nightmare from which he would never escape.[3]

The fleet was trapped and becalmed in the midst of an impenetrable Warp storm. No one could guide the ships through the murk, and they were unable to shift the fleet back into realspace. Few knew this was truly a part of Calas Typhon’s plan. The entire fleet was forced to drift helplessly through the Immaterium. Without hope of salvation, their warships moved aimlessly. It was during this time that the infections of Nurgle began to silently assail the Death Guard. One by one, the Destroyer Plague and Nurgle’s Rot – two of the favoured inventions of the Plaguefather – infiltrated their ships. Had they been any other Legion, the Death Guard would have succumbed to the horrific maladies that beset them. Instead, the superhuman augmentations of the Space Marines proved their worst enemy; their own legendary resilience was rendered into a flaw for, despite the dire diseases which now polluted their every bodily function, they could not die. Instead, the Death Guard were slowly, sickeningly transformed.[3]

Unable to endure the suffering any longer, Mortarion first offered into the Immaterium himself, followed by his Legion, and finally his very soul in exchange for deliverance. A presence in the Immaterium answered, as though it had been waiting all along, biding its time. In the depths of the Warp, the great god Nurgle, Lord of Decay and Father of Disease, claimed that debt and accepted Mortarion and the Death Guard as his own. Thus were born the first Plague Marines.[3]

Many of the weapons employed by the Plague Marines transmit horrific and deadly maladies. They are wicked devices of death designed to please Nurgle and bring about both death and suffering.[1] These weapons include: 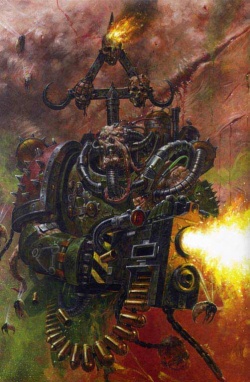