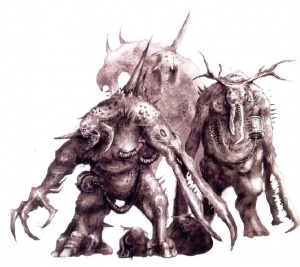 Plague Ogryns are Ogryns warped by the powers of the Chaos God Nurgle, become bloated and putrid harbingers of disease. Similar to Plague Marines, they are utilized by Nurgle warbands.[1] The members of this species have been greatly mutated by the forces of the Chaos god Nurgle who have turned these Mutants into large masses of diseased bloated beings. The hardy and strong Ogryn had proven to be an ideal breeding ground for nightmarish plagues that have turned them into twisted hulking creatures. These mutations inflicted on them have made the Plague Ogryns almost impossible to kill , and the slightest touch from them can bring about a horrible death on their enemies. Their creation first came on Vraks and came at the hands of the Traitor Chaos Space Marines warband known as The Tainted. These devoted disciples of Nurgle were responsible for using their sorcerous arts to transform the labour Ogryn forces on Vraks that were part of the rebel forces that turned against the Imperium.[2]

Since that time, the savants of the Ordo Malleus have come to believe that the secrets of creating Plague Ogryns have been further refined by the Tainted from within their home in the Eye of Terror. As a result, they have traded these festering creatures amongst other devotees of Nurgle in return for new subjects with which they can continue to practice their craft.[2]