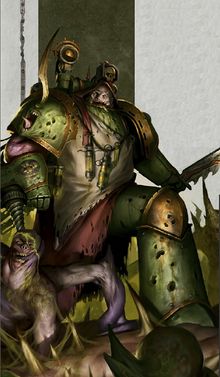 Plague Surgeons are the depraved Apothecaries of the Death Guard who have long since been twisted by the powers of Nurgle.[1]

The unnatural resilience of the Death Guard leaves little need for conventional medicine. Instead, the Plague Surgeons tend to the well-being of the diseases that their brothers carry within their rotting bodies. Like proud fathers, the Plague Surgeons spare no effort in tending to all of Nurgle’s children. Their bodies are incubators for every form of parasite and disease, their flesh and blood offered willingly as living nurseries. As a result, the very touch of a Plague Surgeon is virulently infectious. Plague Surgeons bolster the potency of Nurgle’s plagues in friend and foe alike. The Narthecium-like instruments upon their arms contain booster-vials and macro-stimulants for plagues both natural and warp-spawned, imbuing Nurgle’s servants with new strength even as they worsen the enemy’s sickness.[1]

Plague Surgeons also have another role upon the field of battle, one that has earned them the hatred of loyalist Space Marines. Upon the field of battle, Plague Surgeons will gather the gene-seed of fallen Space Marines, even those from loyalist Chapters. Some of this gene-seed is used in the creation of new Death Guard, while the fate of the rest is best left unspoken.[1] 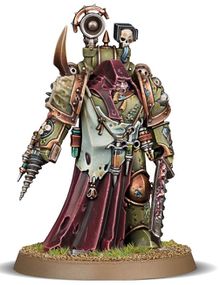