"‘Let them flee beneath cover of their virus bomb. By the Emperor, they shall be repaid tenfold for the evils they have wrought upon Ultramar.’"

— Roboute Guilliman, at the end of the Plague Wars.[3a]

The Plague Wars were a series of battles that occurred within the Realm of Ultramar between the forces of the Chaos God Nurgle and the Imperium at the end of the first phase of the Indomitus Crusade.[2] 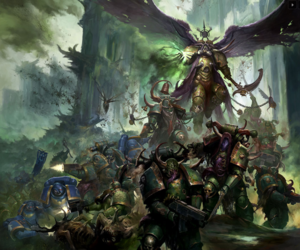 The seeds of the conflict were planted by Nurgle sometime before the latest Black Crusade began, when he decided he wanted to annex the prosperous worlds of Ultramar into his Garden. In order to do this he commanded his forces to create Cults of Corruption and began spreading various diseases throughout three nearby Imperial systems, located to the galactic north of Ultramar. These systems are now known as the Scourge Stars. Controlled by the forces of Nurgle, they were used to launch fresh attacks against the Realm of Ultramar, in order to add its worlds to the Plague Father's Garden.[1]These diseases devastated many worlds, but it was only with the creation of the Great Rift, during the Thirteenth Black Crusade, that Nurgle decided to fully act on his plans.[1] 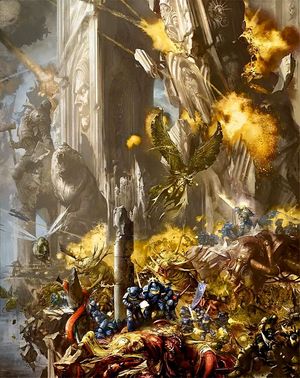 Most prominent of these servants of Nurgle were the Death Guard, which launched a massive invasion of Ultramar led personally by Mortarion who gathered an enormous invasion fleet around him. In attacking Ultramar, Mortarion was not alone, however; two other commanders led massive armies out from the Scourge Stars, each seeking to win the contaminated glory of Nurgle's favour. Typhus, First Captain of the Death Guard, commanded the Plague Fleet, a dilapidated rot-armada packed with Renegades, cultists and his own loyal Death Guard. A third major force, this time a host of Daemons, was led by the Great Unclean One Ku'gath.[2a]. The Plaguefather and his demonic legions ravaged the Tartella System, which lay between the Scourge Stars and Ultramar, before manifesting on the garden world of Iax, an ideal place to nurture new diseases[3a].

The invasion force was too large for the defenders to engage directly but still too small to attack Macragge itself. Nonetheless, Mortarion launched many probing attacks on Macragge, often with Plague Drones and Cultists, in order to drain Ultramar's resources and morale.[3a] Meanwhile, Mortarion moved on smaller more poorly defended worlds, slaughtering the populace in an attempt to goad Guilliman to battle. As Espandor, and Ardium fell under siege, Mortarion had a secondary fleet under Typhus terrorize the outer regions of Ultramar, destroying three of the six major Star Forts overseeing Ultramar's shipping lanes[3a]. On Iax, a group of refugee Imperial Guard carried Nurgle's taint with them, transforming into Plaguebearers and allowing a cohort of Great Unclean Ones to manifest.[7]

The Imperium would go to the Realm of Ultramar's aid and the fierce battles that followed were called the Plague Wars, by the Empire of Mankind.

Guilliman, having just concluded the Indomitus Crusade, eventually arrived with reinforcements to save the beleaguered Ultramar. First, he cleansed the Hive World of Ardium in the Maccrage System of its Death Guard occupiers. It was here that he learned Mortarion was using the ancient artefact known as the Hand of Darkness to craft Plague Engines that were re-animating the dead and turning them into Plague Zombies. Guilliman destroyed the Plague Engine on Ardium and freed the world from the influence of Nurgle.[2b]

Mortarion learned of Guilliman's arrival and, intent on preventing the loyalist Primarch and his reinforcements from turning the tide of his campaign, attempted to trap Guilliman and his forces on Maccrage. To this end, he launched the Invasion of Konor, hoping to use the system as a stepping stone for a full-scale assault on the Ultramarines' homeworld. Ultimately this ploy would fail as the Imperial defence and subsequent counterattack in the system prevented him from achieving his objective. Though the Death Guard and their allies managed to despoil the Konor system's Astropathic Relay station and Aeronautica Imperialis training world, all three of the core planets remained firmly in loyalist hands. Perhaps most importantly, the heavily corrupted Death World of Loebos, Mortarion's ultimate means of taking the system, was destroyed in a near-suicidal Imperial landing operation.[6]

Even with Guilliman's arrival, the attacks across Ultramar were still too many to contain. However, timely arrival of Ultramarines Successor Chapters and reinforcements from Forge Worlds allowed Guilliman to take the initiative. On Espandor, Guilliman launched the Spear of Espandor counterattack that halted the Chaos advance and resulted in stalemate.[3a] The focus of this campaign was also to cut off the Death Guard from the Scourge Stars that were supplying Mortarion with an endless stream of reinforcements.[2d] The Ultramarines and their allies not only retook each of the lost worlds in the Espandor system but also destroyed the Plague Engines that were raising the endless tide of Plague Zombies on each of its worlds. After a ferocious battle in which the Ultramarines Chapter found itself fighting side-by-side with their Primaris Astartes brethren for the first time, the forces of Nurgle were routed from Espandor. Guilliman decisively ended the battle by slaying the Great Unclean One Qaramar with the Emperor's Sword and destroying the last Plague Engine in the system. The Espandor System had been cleansed of the taint of the Plague God and the forces of Nurgle were now cut off from their base in the Scourge Stars. [2e] With Espandor contained, Guilliman launched a series of system-wide counterattacks.[3a]

With Mortarion's main attack on Espandor halted, the Daemon Primarch shifted his focus and joined with Ku'gath. Their supply lines to the Scourge Stars cut, their Plague Engines disappearing (which was slowly eliminating the constant tide of undead reinforcements), and more Imperial reinforcements incoming, the leaders of the invasion force would decide to throw the bulk of their forces against the world of Parmenio[2c]. On Parmenio, the largest armored and Titan battle of the war took place over the Plains of Hecatone. At the battle's height, Guilliman struck Ku'gath's vanguard and slew his Lieutenant, Septicus. In space, the Star Fort Galatan attempted to provide support, but was boarded by the Plague Fleet and massive casualties ensued, including the loss of the Novamarines Chapter Master Bardan Dovaro. Nonetheless, the Ultramarines and their allies made gains on Parmenio and Guilliman led a relief force to Iax.[3a]

Seeking to foil Guilliman, the Primarch was drawn to Parmenio where a trap was sprung by Mortarion, Typhus, and Ku'Gath. Faced with the combined might of Mortarion and Ku'Gath, Guilliman was nearly slain but was saved by what appeared to be a Living Saint in the form of a young girl. The girl burned with the power of the Emperor and drove the forces of Nurgle back.[7a]

The final battle of the Plague Wars would come on Iax, where Mortarion and Ku'gath conspired to lure Guilliman into a deadly trap to kill him with a disease known as the Godblight. However their forces experienced a significant setback due to the outbreak of the War in the Rift, and Nurgle recalled many of his Daemons while Typhus moved to defend the Scourge Stars with a large compliment of the Death Guard. Despite this, Mortarion and Ku'gath violated Nurgle's orders and insisted on going through the plans to kill Guilliman and turn Ultramar into an expansion of the Garden of Nurgle.[11d]

Guilliman knew he was walking into a possible trap, but knew that Mortarion must be confronted in order to save Iax. To that end Indomitus Crusade Fleet Primus launched an invasion of the world, battling first Nurgle daemons and then the Death Guard remaining with Mortarion.[11a] As Guilliman and Mortarion met each other in a fateful duel, Space Marine and Cadian forces sought to destroy Ku'Gaths fragment of the Cauldron of Nurgle powering the forces of Chaos in the Sector. In a desperate struggle, 7 Space Marines led by Edermo and Justinian Parris and Colonel Odrameyer were able to bring down Ku'Gath thanks to the support of Militant-Apostolic Mathieu, who became a Living Saint channeling the power of the Emperor. Odrameyer gave his life to kill Ku'Gath while Mathieu was able to destroy the Cauldron. Meanwhile, Mortarion was able to best Guilliman in their struggle thanks to his Warp-enhanced strength and resilience. After pinning Guilliman to the ground, he administered the Godblight to the Primarch and the last loyalist Primarch seemed to die.[11b][11c]

Between life and death, Guilliman experienced a surreal vision of his meeting with the Emperor shortly after the Terran Crusade. Suddenly infused with holy energies, he resurrected and was able to channel the Emperor directly in order to strike a grievous blow to the Garden of Nurgle itself. Defeated, Mortarion fled with the remainder of his forces. Adeptus Custodes Tribune Colquan was able to evacuate Guilliman, Mathieu, and many other Imperial warriors from Iax before Fleet Primus enacted Exterminatus until the blighted world.[11c] With the Chaos plot on Iax foiled, the Plague Wars effectively ended.[3a]

In a brief respite, Guilliman oversaw the rebuilding and decontamination of Ultramar, as well as the establishment of new procedures for creating further Primaris Space Marines within the Ultramarines. It was not long before new crusades called the Lord Commander of the Imperium away from Ultramar and back out into the galaxy.[4]

The Ultramarines would then launch the Vengeance Campaigns where they led a coalition of their Successor Chapters and Knight Houses across neighboring star systems of Ultramar, that had been overrun by the forces of Nurgle early on during the Plague Wars. This included the attempts by Marneus Calgar to liberate the worlds of the Tartella System.[4]

For the Forces of Nurgle, the war represented a significant setback. The War in the Rift saw Nurgle's domain assailed by rival Gods, while the Plaguefather's Garden was struck a grievous blow that revorborate throughout the warp. Moreover, Mortarion and Ku'Gath lost Nurgle's favor due to their insubordation in refusing to withdraw to the Scourge Stars when ordered.[11d] 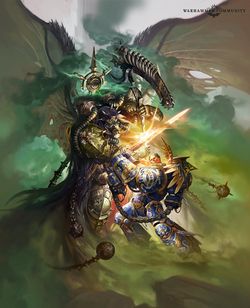 On the Star Fort Galatan

On Iax (occurred later in the war)

Final Battle on Iax, commanded by Mortarion and Epidemius

Originally as outlined in the Dark Imperium novel series, the Indomitus Crusade lasted roughly 100 years and ended with the Plague Wars. However in 2021 Black Library retconned the events of the novels to take place only 12 years after the Crusade had begun with no end-date set. This pushes back the start of the Plague Wars to around 012.M42.[9]