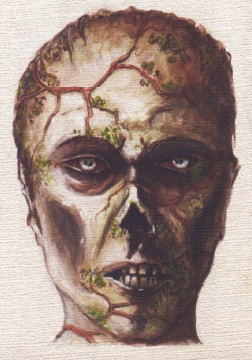 Plague zombies are victims of a virulent and deadly infection known as the "Zombie Plague" or the "Curse of Unbelief", which is spread by the minions of the Plague God Nurgle. Not only do the afflicted die as the result of the disease but they return as undead, mindlessly devoted to adding their former comrades-in-arms to their number.

The Zombie Plague is one of the many foul contagions spread by the followers of Nurgle. It is a combination of a Chaos infection and a physical malaise. The plague degenerates those it infects, although a portion of the victim's life essence is retained by the body even after physical death has occurred. The disease is a spiritual contagion as much as physical one - afflicting those lacking in utter faith.[6] Plague zombies act like archetypal zombies - mindless, shambling and cannibalistic; they are hard to kill and generally require a traumatic blow to the head to kill them. It has been observed that some Psykers appear to be able to control the actions of the zombie hordes.[1]

On affected worlds, a once-loyal man may survive by pledging new allegiance to the Chaos Gods. This is problematic in the extreme for any Imperial reclamations, because, as well as the zombies themselves, they are forced to fight hordes of cultists who have had plenty of time to take over the planet's defenses.[6]

The Inquisition and the Zombie Plague

A new branch of the Inquisition, known as the Ordo Sepulturum, has been formed specifically to investigate and combat the Plague Zombie threat.[6]

There have been numerous noted similarities between the plague and the operation of the Golden Throne. Increased study of the plague by Thorian Inquisitors have led them to believe that its study can help them understand the Emperor of Mankind's life after undeath. However, every attempt at creating a stable "faith virus" has led to mutation in the sample.[6]

One theory among the Thorian Inquisitors is that the plague is an offshoot of the technology used to create the Golden Throne and may have been created by the Dark Mechanicum that reside within the Eye of Terror.[6]