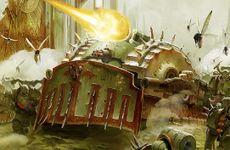 Plagueburst Crawlers are a type of heavy Daemon Engine of Nurgle used by the Death Guard.[1]

The designs for the first Plagueburst Crawlers were created by Mortarion as an act of spite. The Death Lord sought to create a mobile artillery piece that would outclass any comparative Imperial weapon, and thus demonstrate the Death Guard’s superiority over their former kin. For months he locked himself away in the smog-wreathed spires of the Black Manse on Plague Planet, obsessing endlessly over his foul brainchild, turning all of his remarkable intellect to the challenge. The resultant Daemon Engines reflect well the values of the figure that created them. Plagueburst Crawlers are lumbering, formidable siege tanks whose huge ram-blades, thick armour plating and daemonic energies provide them with incredible resilience. Their fearsome Plagueburst mortars boast a parabolic fire arc and terrifying range, while the shells they fire combine high-radius explosives with lethal clouds of corrosive spores to inflict damage comparable to that of Imperial Demolisher Cannons. The drawback of this weapon is its inability to fire at targets that are closer than its minimum range. However, the remainder of the Crawler’s weaponry is intended to slaughter the foe up close, spraying slime and hails of viral shells at any who approach.[1]

Great effort is required to bind a Daemon within each Plagueburst Crawler, once installed the possessed entities tirelessly obey their masters and, by extension, the will of Mortarion. Plagueburst Crawlers are not swift vehicles, even running at full power. Yet their advance is as grinding and relentless as the Death Guard themselves. Intended to support infantry offensives, Plagueburst Crawlers plough forward like huge mechanical slugs, their mortars firing with metronomic regularity. An area under sustained bombardment from these weapons becomes so saturated with foul spore clouds Armour provides little protection, for the daemonic spores corrode the thickest adamantium plating. These hideous effects have made the Plagueburst Crawler a much-hated weapon of war.[1] 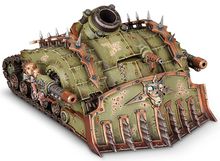