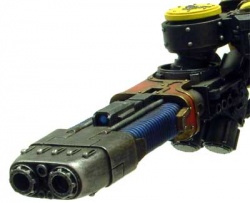 A Plasma Blastgun mounted on a Mars Pattern Warhound Titan.[7]

The Plasma Blastgun is a Plasma Weapon employed by the Imperium. Generally used against Titans, the Plasma Blastgun can devastate swaths of the battlefield with its superheated blasts of energy. It is able to be mounted on all Imperial Titans as well as certain Super-Heavy Tanks and other vehicles.

The Plasma Blastgun uses the same technology as its smaller cousins, the Plasma Pistol, Gun, and Cannon, but on a massive scale. Unlike its smaller brethren the Blastgun does not suffer from the same overheating problems due to the fact that the massive engines carrying it can install more efficient cooling systems.[2] Still, the sheer amount of waste heat and thermal shockwave generated by the Plasma Blastgun can be dangerous to anyone standing too near, requiring some caution when operating around friendly units.[3] The firepower unleashed by a Plasma Blastgun is stupendous, able to defeat Titan-grade Void Shields in a few shots and reduce armour to slag.[4] For this reason, the weapon is a suitable replacement for the Volcano Cannon in cases where a field refit must be carried out, although the Plasma Blastgun cannot match it in terms of range and requires the firer to get closer their target.[2] The Blastgun also benefits from the fact it taps directly into the plasma reactor of the Titan carrying it, allowing for an unlimited number of shots.[1] Smaller vehicles which cannot carry reactors must make due with massive photonic fuel cells which provide fewer shots, however, even with this in mind the Blastgun is simpler to maintain and supply than other comparable weapons like Turbo-laser Destructors, making it the ideal choice for extended operations.[2][4] Like many other plasma weapons the Blastgun has multiple firing modes, able to unleash either a single full-powered blast or a series of weaker rapid-fire shots, increasing its utility against many different types of opponents.[1]

The most common version of the Plasma Blastgun.[8b]

A variant of the more common Ryza pattern, the Omega pattern blastgun was recovered in M39 by Explorator Vaslistle Hum'nal, though doctrinal arguments within the Adeptus Mechanicus would prevent its field testing and development for centuries. The weapon uses a more compact generator design and force crucible, which is easier to manufacture and repair and can be mounted in smaller war machines such as the Macharius Heavy Tank, but also generates more heat and is less stable than the Ryza pattern. Regardless the weapon's benefits outweigh its drawbacks and it is constructed on Lucius, Hellgrace and Dynax Primus.[8b]