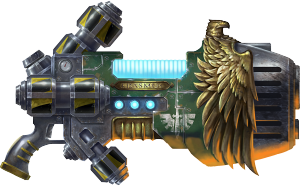 The plasma cannon or heavy plasma gun is a plasma weapon, a larger version of the plasma gun.

Due to its size and massive power requirements, plasma cannons tend to be found mainly on vehicles, but Space Marines are known to use them in their Devastator Squads. The "heavies" of some hive world gangs often make use of the plasma cannon.[1] The weapon generates plasma which it fires as a glowing super-heated bolt of energy, which on hitting an object, reacts with its matter to produce spheres of boiling nuclear energy like miniature suns. For this reason they have the informal name of "sun gun".[2]

The gun itself has a similar effect to the plasma gun, except this weapon does damage over a much larger area. Several individuals can be caught in one blast, making the plasma cannon a potent weapon. Unless hooked up to a vehicle's systems, a plasma cannon suffers from the usual overheating problems that plague other plasma weapons.[Needs Citation]

Vehicles that can carry the plasma cannon include the Leman Russ Battle Tank, Sentinel[3], and Dreadnought.