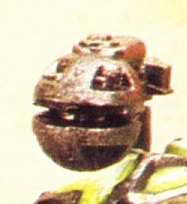 A Plasma Destructor mounted on a Warlord Titan

Plasma Destructors are vast Plasma Weapons, second only in size to the Plasma Annihilator. They are mounted on Imperial Titans and provide heavy firepower over a larger area than other weapons due to their ability to fire multiple times in a row.[1]

The Plasma destructor is commonly found on Warlord Titans.[2] The Imperator class titan can also carry one or more Plasma Destructors on its carapace hard-points.[3] Warhound and Reaver Titans are not fitted with these weapons as their plasma reactors are too small to power them.

The Sunfire-pattern plasma destructor, carried by Mars-Alpha Warlords, is also referred to as a plasma annihilator. [4]