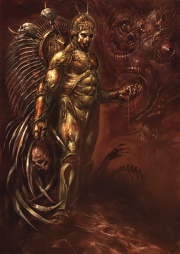 Pontius Glaw in his mechanical form.[4]

Pontius Glaw was a scion of House Glaw, one of the noble Houses of Gudrun, and later one of the most notorious heretics in the Imperium.

Pontius was born around 993.M40[2], the seventh son of the Glaw patriarch, Lord Oberon Glaw. As the seventh son, Pontius was denied access to the lion's share of his family's power and wealth, which was pieced out among his elder brothers. Left to his own devices, Pontius indulged himself in gambling and debauchery. Despite his keen intellect, cultured views, natural charisma, and a fine education, Pontius eventually became corpulent with excess. His early life, as well as his later infamies, were required reading for Inquisitors in training, a stern lesson against wasting one's natural advantages on self-indulgence.[1a]

Many persons theorized that Pontius turned to Chaos in his late forties, seeking a way to restore the fortune and health that he had so foolishly wasted; yet even his more innocuous actions in his pre-Chaotic youth were tainted by brutality and ruthlessness: he made large sums of money by buying Pit Slaves and staging exhibitions famous for their cruelty[1a]

Pontius himself claimed that he was converted to Chaos in 019.M41, when he was twenty-six. Buying a bestial Pit Slave named Aaa, he was "rewarded" with Aaa's most prized possession, a golden torc that corrupted Pontius as soon as he put it on. He described his conversion as a glorious revelation, allowing him to see beyond the pale, featureless universe described by the Ecclesiarchy.[2a]

After his corruption he became the leader of a Chaos cult that wrought havoc across the Helican sector, gaining him the attention of the Inquisition. Inquisitor Absolom Angevin and his band hunted Pontius down and executed him with the aid of his own family (seeking to publicly distance themselves from their heretic kinsman).[1a] Commodus Voke was a member of Angevin's retinue during this famous hunt.[1b] 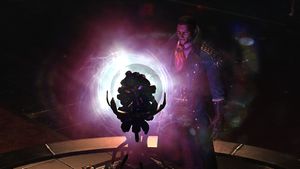 Two centuries later, Inquisitor Gregor Eisenhorn became suspicious of House Glaw, having heard references to something called "the Pontius" from the heretic Murdin Eyclone on Hubris. Investigating House Glaw, Eisenhorn discovered that "the Pontius" was a crystal that contained the essence of Pontius Glaw, and that his family had promised to resurrect him, in exchange for his vast store of Chaotic knowledge. House Glaw, far from being innocent of their kinsman's corruption, were immersed in it, engaged in their own plot to acquire the infamous Necroteuch from the Saruthi species, anticipating that it would bring them such power that they had no reason to fear the Inquisition.[1b] Upon destroying House Glaw, Eisenhorn took Pontius' crystal into his possession and hid it away with an old friend, Magos Geard Bure, on Cinchare.[1x][2a]

Eisenhorn was sometimes troubled by this decision, knowing that, logically, he was obliged to turn over the crystal to the Ordo Hereticus for destruction, but reasoned that Pontius's knowledge might be useful in the future. Eisenhorn's savant, Uber Aemos, added that the crystal device alone rightfully belonged to the Adeptus Mechanicus, from whom it had likely been stolen, and was an invaluable piece of archeotech.[2a]

Several decades later, Eisenhorn returned to Cinchare and offered Pontius a trade: he would have Magos Bure construct a mechanical body for Pontius to inhabit, in exchange for any information that he might provide on Daemonhosts; Eisenhorn knew that he was badly outclassed by the Radical Inquisitor Quixos, whose most powerful weapons were the daemonhosts Cherubael and Prophaniti. Although Eisenhorn swore that Pontius would never be released from imprisonment, Pontius was so excited at the prospect of having a body to inhabit that he instantly agreed.[2a]

As he was leaving Cinchare to confront Quixos, Eisenhorn was troubled by the realization that, for all of Pontius's evil, Eisenhorn had enjoyed their conversations, and even more troubled by the thought that, except for his allegiance to Chaos, he was the sort of man that Eisenhorn would gladly have called a friend.[2b]

Some years after this, Pontius managed to kill Magos Bure and escape from Cinchare, and found his way to a world where a Daemon King, Yssarile, was said to have been buried with his "barque" - some kind of daemon weapon that Pontius was trying to obtain. Pontius orchestrated a ruthless campaign that killed or incapacitated most of Eisenhorn's retinue and led to Eisenhorn being declared Excommunicate Diabolus by the Inquisition.[3] Pontius's other objective was the Malus Codicium, Inquisitor Quixos's prized tome of chaotic knowledge, which would unlock Yssarile's vault.[2]

Meeting the heretic in single combat, Eisenhorn was no match for Pontius's mechanical body, and on the verge of being killed, until he produced the Codicium and began to tear its pages out. Pontius was distracted long enough for Eisenhorn to plunge his force sword, Barbarisater, through the machine's head, shattering the crystal containing Pontius' essence and killing him once and for all.[3]