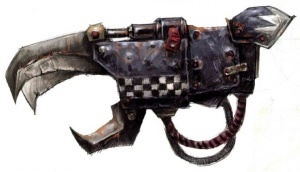 A Power Klaw is an extremely powerful Ork power weapon.

It is similar in characteristics to an Imperial Power Fist, being an armoured, powered gauntlet, strapped to an Ork's arm with a piston-driven pincer comprising two to three snapping blades. These are sheathed in energy the same way a Power Fist is, and so can effortlessly rip through any armour, tearing any enemy into bloody paste. It is particularly effective against vehicles. These weapons are amongst the biggest and choppiest an Ork can possess and often serve as symbol of status as well as a weapon. As such, many of them are owned by Warbosses or by particularly brutish Nobs, in which hands Power Klaws become even more effective, due to their skill and strength.[1][3b] Orks often amputate their own arms, taking the weapon as an augmetic implant.[6] Power Klaws are most often found incorporated into Mega Armour.