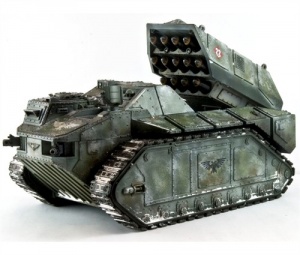 The Praetor Armoured Assault Launcher is a missile launching vehicle of the Imperial Guard.

The Praetor is a variant of the Crassus Armoured Transport. Armed with a Praetor multiple missile launcher (which the vehicle is named after), the Praetor is used for long range missile bombardment in support of Imperial Guard units. The Praetor missile launcher was last thought to have been used on the land-leviathans of the Tellarite Rebellion forces during the Nova Terra Interregnum. The STC template for the weapon was rediscovered -along with several others of note- by tech-priests of the re-consecrated Forge World of Zhao-Arkkad. This led to the dissemmination of the Crassus chassis to introduce the Praetor weapon platform by Zhao-Arkkad's manufactoria. The Praetor has been spread to frontline regiments throughout Segmentum Tempestus.[2]

The Praetor is armed with a single Praetor Launcher, which can be fitted with a number of different munition types. For example, Foehammer and Firestorm missiles provide a hard-hitting and devastating barrage which can be used against the ground-based enemy vehicles or enemy-held objects. The Pilum warhead enables the Praetor to be used against the flying vehicles and creatures, sophisticated tracking systems in its AA mount constantly monitoring skies for potential airborne targets. In addition, the Praetor is armed with two heavy weapons sponsons, typically equipped with Heavy Bolters, but can be exchanged for Heavy Flamers, Autocannons, or Lascannons. In addition, the Praetor can be fitted with numerous upgrades, including: a Hunter-killer missile, Dozer Blade, and a pintle-mounted Storm Bolter or Heavy Stubber.[2] 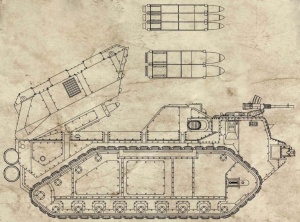