Praetorian Breacher Squads were a type of Breacher Squad variation used by the Ultramarines Legion during the Great Crusade and Horus Heresy.[1]

As the Ultramarines placed a high value on shield-equipped units, the elite Praetorians of the Legion were further equipped with Power Weapons. They eschewed the ranged power of the Bolter and instead focused on close combat. Praetorian squads were often assigned to shipboard security detail as well as rapid counter-boarding actions. In ground operations, they acted as the anvil upon which the enemy would be pinned in order for mobile Legion elements to outmaneuver and destroy them. Relentless in their advance and immovable in their defense, the Veterans of Praetorian Breacher Squads won countless battle honours over the Crusade.[1] 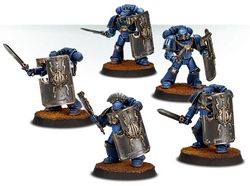