The Praetorian Guard are Imperial Guard regiments raised from the planet Praetoria.[Needs Citation]

Praetoria is a heavily populated Hive World that lies in a system close to the Imperial naval base at Bakka. The overpopulated Hive cities of Praetoria are renowned for their squalor and degradation, and produce some of the toughest gangsters on any of the hive worlds in the Imperium. This vast population work as little more than slave-labor in the huge factory complexes of Praetoria, producing the goods that have made the planet (and its rulers) one of the richest in the Imperium, with a huge fleet of merchant craft that trade all over the Segmentum and beyond.[Needs Citation]

Imperial Guard regiments raised on Praetoria are renowned for their iron discipline and bravery, even in the face of the most overwhelming odds. The planetary lords of Praetoria hold it is only through fearsome training and draconian punishments for the most minor infringements that the hive-toughened inhabitants of their planet can be made to follow orders and do as they are told. Whatever one's views on the training methods used, they seem to work, producing troops that are as ferocious on the attack as they are determined in defence.[Needs Citation]

The Praetorians fight in a similar way to the Mordian Iron Guard, using concentrated volley fire to eliminate the enemy in vast droves.[Needs Citation]

Praetorian uniform typically consists of a scarlet tunic with epaulettes, and dark blue trousers with a vertical scarlet stripe on the outside leg. The pith helmet is worn as headgear.[Needs Citation] 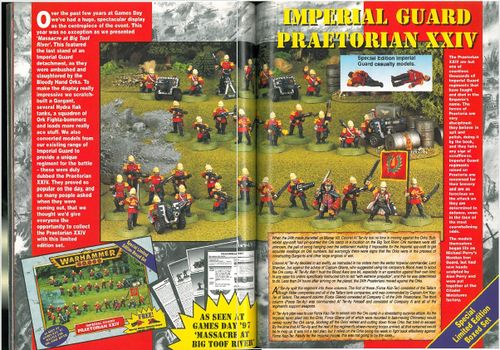