Praetorian of Dorn by John French is Book 39 of The Horus Heresy series. It was released on 20 August 2016 in hardcover, e-book, and MP3 audiobook formats. It was released during the 2016 "Summer of Reading" event along with 5 "Secrets of the Solar War," short descriptions of the Solar System during the Horus Heresy. The audiobook has a running time of 12 hours and 57 minutes, and it is narrated by Jonathan Keeble. It was included as part of the "Nine Loyal Primarchs" set for 2016 12 Days of Christmas: Day 9.

The novel describes the fighting between the Imperial Fists and the infiltrated units and operatives of the Alpha Legion in the Solar System leading up to the Battle of Terra.

The Horus Heresy reaches the Solar System - will the defences of Rogal Dorn and his Imperial Fists hold against the onslaught?

Recalled from the Great Crusade after Ullanor, Rogal Dorn and the VIIth Legion were appointed as the Emperor's praetorians but only after the Warmaster's treachery was revealed did the full extent of that sacred duty become apparent. Now, the Solar System comes under attack for the first time since the war began, and many of the seemingly impregnable defences wrought by the Imperial Fists prove inadequate. With all eyes fixed firmly upon this new threat beyond the gates of Terra, who will protect Dorn from the enemy within? 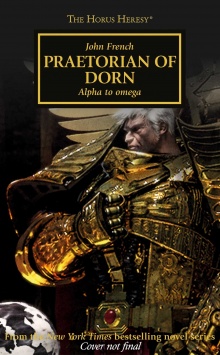 Early cover for Praetorian of Dorn

Secrets of the Solar War

Five "Secrets of the Solar War" were released on the Black Library website leading up to the publication of Praetorian of Dorn.

Day 1: "Terra has been made a fortress but it is a fortress with two walls: the wall within, and the wall without. The wall within is the gate from the Imperial Dungeon to the Emperor’s mysterious Great Project. Here stands the Master of Mankind himself, at the head of the Custodians and the Sisters of Silence. The wall without is the spheres of defence that extend from the literal walls of the Imperial Palace to the darkness beyond the edge of the Solar System. On this outer wall stands the Praetorian of Terra, Rogal Dorn, and his Imperial Fists. If either wall falls then everything is lost."

Day 2: "The Imperial Fists’ defence of the Solar System is divided into Spheres. All the defences and forces within each Sphere are commanded by a senior Imperial Fist raised to the rank of Lord Castellan by Rogal Dorn. The First Sphere is the outermost, and comes under the command of Sigismund. The Second is commanded by Halbrecht, while the Third, under Efried, encloses the Martian battle sphere and has the traitorous tech-priests fully bottled in. Terra is marshalled by Dorn himself. The Imperial Fists forces in the Solar System are divided between each of these commands, along with thousands more ships, void defences and millions of mortal troops. Separated by millions of kilometres, signals sent between the forces assigned to each sphere take hours to reach each other. When the invasion finally comes word will pass by a single astropathic flare, a psychic message passed as fast as thought that says that the traitors have come to the walls of Solar: 'Fire on the mountains'."

Day 3: "Alpha Legion units placed into enemy territory are trained and conditioned to pursue broad mission objectives in whatever way they think best. The scope of these objectives are called mission parameters. An Alpha Legion force or warrior might have been given a series of potential mission parameters before its infiltration, some of which might be radically different in shape: killing or protecting the same individual, for example. Each parameter will have a single activation word or phrase that will set an infiltrator off towards a set of objectives. A word spoken down a vox or scrawled on a slip of parchment is enough to change the direction of their action from one parameter to another. And it is not uncommon for members of the same force to be following different mission parameters..."

Day 4: "Archamus is Master of Dorn's Huscarls, but also bears the honour of being the Last of the First. This First were those Imperial Fists created after Rogal Dorn was reunited with the Emperor and given command of the VII Legion. They were also the first to make their oaths to Rogal Dorn, and their names were the first to be etched on the walls of the Temple of Oaths aboard the Phalanx. By the time of Praetorian of Dorn, Archamus is the last of this honoured brotherhood."

Day 5: "The Solar System is the graveyard of countless civilisations that rose and fell long before the Emperor unified Terra and sent the Great Crusade into the stars. Artefacts and wreckage fill the gulf between planets and moons. Labyrinths of crushed ruins sit beneath the cities of Terra and the stones of the Imperial Palace. The people who live and toil in the system that birthed humanity have cultures, traditions and rivalries that existed before the rise of the Imperium, and persist even under its unity. The Jovian void clans, the gene-cults of Luna, the smugglers and pirates that hide within the debris reefs, are just a few of the hundreds of ancient factions clinging to the bones of those that came before that make up the 'unity' of the Solar System."

Across the Sol System, various Alpha Legion assets are mobilizing. The crew of a Jovian cargo ship bound for Terra is killed and replaced; in the Gobi tox-wastes, Myzmadra and her psyker companion Incarnus awaken sleeping Alpha Legionnaires; beneath the Imperial Palace, Silonius emerges from his sus-an hybernation, and meets up with other infiltrators; in the Damocles Starport, hallucinogens overwhelm the workers and their Imperial Army guards. In the Imperial Fists' command chamber, the product of their combined efforts is revealed, as rioting erupts across Terran hives, ships explode in orbit, and the vox begins to blare 'Lupercal'. Archamus nearly sounds the alert that the Warmaster's forces have arrived, but Rogal Dorn arrives and stops him. They search through the alerts, attempting to discern the Alpha Legion's true objective, and find that an Imperial Fists patrol in the Palace missed their check-in. Gathering Archamus and his Huscarls, Dorn pursues the Alpha legionnaires to the Investiary, a massive chamber containing statues of all the Primarchs. A fight ensues, and Dorn kills most of the Alpha Legionnaires, but not before they detonate explosive charges, bringing down every statue except for the two depicting Dorn and Alpharius. Silonius escapes into the bowels of the Imperial Palace. Regrouping after the attack, the chaos across Terra quelled, Dorn assigns Archamus a mission: find the remaining Alpha Legion forces, and stop them. Outside the Palace, Silonius meets up with Myzmadra, Incarnus, and their Astartes companions, and the group leaves Terra. In the void beyond the Sol system, on the warship Alpha, more members of the Alpha Legion awaken.

A flashback introduces us the Archamus' history: one of the first twenty Astartes of the Imperial Fists, we follow his ascension to Astartes and several of his trials. When he finally swears his oath of loyalty to Rogal Dorn, he trades his birth-name Kye for the name of Archamus, which belonged to a fellow aspirant who died following Kye's orders.

Part 2: Guardians at the Gates

Archamus recruits two allies for his mission to stop the Alpha Legion: Kestros, an Imperial Fists sergeant, and Andromeda-17, scion of Luna's Selenar gene-cults. While Silonius and his companions wait for their rendezvous in the void of space, it is revealed that while most of the Alpha Legion assets were put in place before the Horus Heresy and were operating under old orders, Silonius has a new mission with different parameters. Sork, a void scavenger and Legion asset, brings Silonius' group onto his ship Wealth of Kings, while aboard the Alpha a message is sent out to awaken other ships.

Archamus, Kestros, and Andromeda examine records of the previous attack, hoping to determine the Alpha Legion's purpose, resources, and future objectives. They track down the clearance codes used to enter the Damocles Spaceport to Dowager-son Hyrakro of the Hysen Cartel, and launch an attack on his estate supported by the Imperial Fists with the intention of capturing him for interrogation. Archamus is engaged by the Alpha Legion, who sent an operative to assassinate Hyrakro before he could talk, but the Imperial Fists manage to secure the target.

On Terra, Malcador chastises Dorn for sending the Imperial Fists after the Alpha Legion instead of leaving the silent war to him, but Dorn refuses to call off Archamus. It is revealed that few astropathic messages are reaching Terra from the surrounding systems, suggesting that Horus' forces are closing in. Gathering a number of Imperial Navy officers involved in Terra's defense, Dorn orders them to prepare for battle; they will be going beyond the Sol System to take the fight to Horus. However, one of the generals quietly relays the plans to the Alpha Legion.

Silonius' group attacks a relay station near Mercury, in order to send a message to Alpha Legion forces. The older operatives send one signal, and Silonius sends another. Meanwhile, Archamus, Kestros, and Andromeda return to the ship Unbreakable Truth after their attack on the estate. Hyrakro spills information after minimal coercion, including the codes to contact the Alpha Legion via a group of Venusian smugglers. Posing as Hyrakro, they send a message asking for a rescue, so that they might capture the next link in the Alpha Legion's chain of operatives. Sork receives the message, and the Alpha Legion Astartes aboard his ship discuss their options. They accept the request, with the intention of eliminating Hyrakro. At the rendezvous, the Alpha Legion operatives kill Hyrakro and several Imperial Fists, but Incarnus is captured, and only Silonius and Myzmadra escape.

Aboard the Unbreakable Truth, Incarnus agrees to tell Andromeda and Archamus everything he knows in exchange for protection. He reveals that the Alpha Legion's primary objective was to gather information on how the Imperial Fists responded to threats. He warns them that an Alpha Legion fleet is coming from just outside the Sol System, summoned from the Mercury relay, and that Silonius sent a message to someone within the Sol System. Archamus attempts to get in contact with Dorn, but he has already left the system with a large number of Solar Defense forces, leaving Terra vulnerable to the Alpha Legion armada.

Finally, it is revealed that the commander of the Alpha is the true Silonius, and the operative who has been going by that name is actually Alpharius.

Across the Sol System, chaos erupts as the Alpha Legion springs into action: factories explode, riots break out, and critical systems malfunction. Meanwhile, Myzmadra and Alpharius infiltrate Pluto's fortress-moon Hydra, murdering the astropaths and taking over the communications hub. Beyond Pluto, Sigismund's fleet engages the approaching Alpha Legion armada, but discovers that many of their ships contain nothing but servitors, revealing that this assault was a diversion. Caught out of position by the feint, Sigismund's forces suffer heavy casualties, and are pushed back towards Pluto's moons.

Archamus attempts to teleport with a group of Imperial Fists into the Hydra communications center, but is pulled off target by a homing beacon set by Myzmadra while Kestros assaults the communications center alone. Trapped in a sealed munitions vault, Archamus is ambushed by Alpharius. Back in the communications center it is revealed that Incarnus was still feeding information to the Alpha Legion after his capture. The Phalanx arrives with a fleet, forcing the Alpha Legion into a retreat from Pluto, while Dorn teleports into the fortress-moon with his Huscarls. He battles Alpharius and his bodyguards, and slays the Hydra Lord, as Archamus succumbs to his wounds.

Distantly, Omegon registers the death of his brother, and assumes the mantle of Alpharius. Kestros, on Terra, takes the oath-name of Archamus.