The Praetors of Orpheus are a Space Marine Chapter, created from the Ultramarines during the Second Founding.[1]

The Praetors of Orpheus are stationed on the world of Beta Entebes II within a subterranean base, which serves as their Fortress Monastery, called the Labyrinthe of Orphia.[2a] They are known for their disciplined approach to the Codex Astartes and are compltely inflexible in their adherence to the tome. While the Codex is their guide in all things, they are prone to interpreting passages too literally.[4]

The Praetors wear predominantly white armour with distinctive sky-blue shoulderpad trims, backpack, chest eagle and gun-casing. Company affiliation is denoted both by a Roman numeral on the left kneepad and also the colour of the pad itself.[1] The chapter badge is a blue shield with a yellow sunburst in the center, with the exception of the top left quarter which is white with a blue Ultramarine symbol.[1] 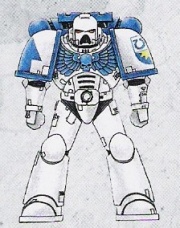