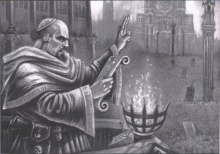 Preaching to the citizenry

Preachers are the lowest ranking clergy in the Adeptus Ministorum. They are sometimes known as Defenders of the Faith and they and their lay followers are sometimes a community or world's first line of defence against invading forces.[Needs Citation]

A preacher is the leader of a shrine at the centre of a parish, which is part of a diocese, of which there are thousands. They serve the local population and are stern and unforgiving, seeing it as their duty to hound out heresy among their flock. They often preside over the public execution of discovered psykers, mutants and other deviants.[1]

In the Imperial Guard Preachers are represented by Ministorum Priests and led their brethren in battle, inspiring them with their passionate oratory even under attack from the enemy. Other Preachers or Banishers accompany Inquisitors in their quests against Chaos. Ecclesiarchy Confessors led the Orders Militant - the Sisters of Battle. It is a foolish enemy who things they can out-fight a devotee Confessor and his most loyal followers.[4]

A successful preacher may rise to become a Pontifex, whose authority extends over parishes and other preachers. Their responsibilities can encompass an entire planet or even several planets, and their titles and ranks may be extended to indicate this. A Pontifex Terra is responsible for a part of the preachers and parishes on Terra. A Pontifex Mundi is in charge of the religious life of an entire world. A Pontifex Urba is the religious overlord of a city, and a Pontifex Astra's authority covers the shrines of one or more spacecraft.[2]