The Primarchs were the twenty genetically-engineered "sons" of the Emperor of Mankind, and the genetic "fathers" of the Space Marine Legions. The Emperor used his own DNA in their creation, and they were designed to be far superior to the average human: immensely larger, stronger, hardier, faster, and more intelligent. They were also incredibly charismatic, as their main role was to be generals and leaders of the Imperial military. Each had their own purpose and specialty, allowing them to serve in specific functions that the Emperor's forces would need in reconquering the galaxy.

Originally, Primarch was simply a martial rank of the Thunder Warriors. Each of the twenty legions of Thunder Warriors was led by a "Primarch". However these warriors were no different than those they led. Instead, they were officers of superlative skill promoted to the position by the Emperor. One of the known Thunder Warriors Primarch's was Ushotan.[33]

Creation of the Primarchs 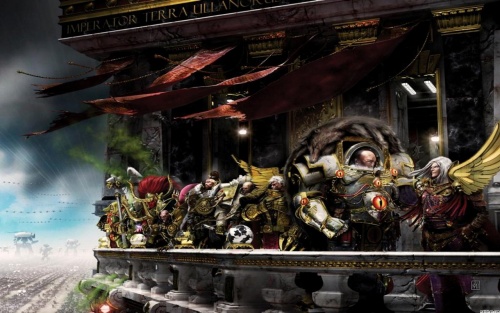 An assembly of the Primarchs during the great Triumph after the Ullanor Crusade. Left to right: Sanguinius, Mortarion, Magnus the Red, Angron, Jaghatai Khan, Lorgar Aurelian, Rogal Dorn, Horus Lupercal, and Fulgrim.

However, the Gods of Chaos somehow managed to spirit them away just prior to their maturation with a great Warp vortex[9] and it is speculated that they also managed to tamper with the infant Primarchs. The scattering of the Primarchs may have been the result of a Causal Loop created when Argel Tal and his men were sent back in time inside the Eye of Terror to the Emperor's laboratory, as they were convinced by Ingethel the Ascended to destroy the Gellar Fields protecting the infants from the touch of the Chaos Gods. Almost immediately after the Gellar Field generators were disabled, the Primarch's were sucked into a Warp vortex.[14] Other sources state that the Perpetual Erda was involved in the theft of the Primarch's and created the Warp Vortex that scattered them due to her anger over the fate the Emperor planned for her "children".[38a]. According to Erebus, Erda was unwittingly manipulated by the Chaos Gods into committing this act.[42] Several Primarchs including Konrad Curze, Roboute Guilliman, and even Sanguinius all came to believe that the scattering of the Primarchs and their upbringing on distant worlds had all been engineered by the Emperor.[23]

Scattered across the galaxy, beyond the Emperor's reach, and all landed on different worlds vastly separated from their Father. The Emperor could sense that the infant Primarchs were alive, but was unable to reach them. Therefore he used their previously collected DNA samples to create the Space Marines. The genetic material of each one of the Primarchs was used to found a single Space Marine Legion, twenty in total. The new homeworlds of the infant Primarchs and subsequent experiences on those worlds would influence and mold them to a large extent. There they quickly grew to adulthood and often rose to power, ruling, leading, and helping the inhabitants. As the Emperor found them, he was generally pleased by their actions, and quickly gave them the leadership of their respective legion.

While Arkhan Land aided the Emperor in investigating the nature of Angron and his Butcher's Nails, the Emperor explained that he had no emotional attachment to the Primarchs because they were tools and weapons. When asked why the Emperor allowed the Primarchs to call him father although he felt no attachment, the Emperor described the Pinnochio story and it is natural for a creation to refer to a creator as father.[25]

Traditional accounts state that the first Primarch to be found was Horus, who became the Emperor's favourite. However a dubious account given by Alpharius states he was the first, and landed on Terra itself following the scattering.[40a] Most Primarchs somehow recognized the Emperor on sight, and immediately pledged their allegiance on the spot. A few, (Leman Russ, Ferrus Manus and Vulkan) only followed him after being bested in contests. Angron refused, and was abducted from his homeworld, something he never really accepted. The last to be found was Alpharius.

According to Malcador the Sigilite, both the Emperor and himself deliberately agitated the Primarchs and sought to turn them against one another, with the resulting war purging certain unmanageable Primarchs and their respective Space Marine Legions just as they had the earlier Thunder Warriors. This would leave humanity, not bio-engineered superhumans, as the rulers of the galaxy. However, the Ruinious Powers intervened before their plan could be fully formulated, leading to disaster in the Horus Heresy. This account may be either a partial or total lie, as Malcador himself seems to keep its validity ambiguous.[27]

At the end of the Great Crusade Warmaster Horus fell to Chaos, and eight of his fellow Primarchs followed him against the Emperor, resulting in a full-scale civil war known as the Horus Heresy. Each Primarch chose his side, loyalists against traitors, leading their legions against their former comrades.

Almost nothing is known about the two unknown primarchs.

References to the second and eleventh Primarchs are made in the short story, The Lighting Tower[12], in which Rogal Dorn describes the plinths on which their statues stand should be vacant and says that 'no one ever spoke of those two absent brothers. Their separate tragedies had seemed like aberrations. Had they, in fact, been warnings that no one had heeded?' Also in The First Heretic, Lorgar makes several references saying that the Emperor ordered them to be forgotten. During the time five Word Bearer captains spent being shown secrets of the galaxy by the daemon Ingethel they are shown the Emperor's gene-labs where he is creating the Primarchs and the moment that they were scattered by Chaos. During their time wandering the labs as insubstantial ghosts undetectable as long as they don't touch anything they speak of the two lost legions, mentioning how they were erased from Imperial records and how Roboute Guilliman's Ultramarines legion mysteriously swelled in numbers each time one of the two legions was "erased." The implication seems clear that at least part of the fighting force of the "lost" legions was entrusted to Roboute Guilliman and incorporated into the Ultramarines.[14]

Note: If this is true then perhaps entire chapters descended from the original Ultramarines legion are in fact part of the gene-seed of the two lost legions. At the time of the Heresy remarks made by the five Word Bearers captains Argel Tal, Xaphen, Torgal, Malnor and Dagotal suggest that the fate of the lost legions is relatively common knowledge though kept hushed up. In the intervening ten millennia between the Heresy and the current age of the 41st millennium it is likely this information was forgotten. It is an interesting side-note that the lost legions were numbers two and eleven. Two plus eleven equals thirteen-the number of the Ultramarines legion.[14]

The traitor Primarchs in this story are covered with a shroud, so the fate of the second and eleventh is undetermined. They may have been found and befell a tragedy as it implies they were spoken about previously.

In the novel Prospero Burns by Dan Abnett, it is suggested that Leman Russ and his Space Wolves legion had been used by the Emperor in the past to cull/pacify the two legions and that the Emperor had created the Wolves for just an event, utilizing their barbaric, untamed nature as a sort of insurance policy for use against other Space Marine Legions. This is further demonstrated by the unleashing of the Wolves on the Thousand Sons Legion in the same novel.[18]

There have been several instances of cloned Primarchs, the result being a mentally unstable, confused, and sometimes deformed creature. The first cloned primarch was Ferrus Manus, created by Fabius Bile at the demand of a mad Fulgrim. Fulgrim attempted to again convert Ferrus to his cause before killing him once more, a process that was repeated multiple times with new clones.[21]

Perhaps the most notable example of a cloned Primarch was after the Horus Heresy, where Fabius Bile again cloned a son of the Emperor, this time Horus from DNA provided by the Warmaster's corpse. Confused and senile, this clone of Horus didn't initially recognize many of his closest comrades such as Ezekyle Abaddon and proved a poor imitation of the real Lupercal. Abaddon killed the clone, and in its dying moments it recognized who the First Captain was. During the same period, Bile attempted to clone all twenty Primarch's from gathered samples, the result being a hall of pods with monstrosities and deformed adolescent creatures. All of these abominations were killed by Abaddon and his forces.[22]

Sometime after The Shattering, Bile discovered one of his clones of Fulgrim managed to survive underneath the rubble of Harmony. Under Bile's care the clone rapidly matured and was "pure", retaining none of Fulgrim's corruption. However when Bile saw that the clone still retained all of Fulgrim's arrogance and was doomed to go down the same path as the original, he traded him to Trazyn the Infinite in exchange for a lost Emperor's Children Gene-Seed stock.[39]

Gregor Eisenhorn refers to the "Primarch" of the White Consuls Space Marine Chapter, when stating that he made it a point to commend a heroic Sergeant who saved his life, at the cost of the Sergeant's own, on Thracian Primaris. Since the White Consuls are a Successor Chapter, and because there are no living or active primarchs within the Imperium, he seems to be using the term "Primarch" interchangeably with that of Chapter Master.[5]