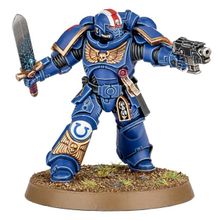 Lieutenant was a rank of Space Marine used in the Legiones Astartes during the Great Crusade and Horus Heresy. It fell out of use for many years thereafter upon the implementation of the Codex Astartes.[1]

Ten thousand years after the Heresy upon the return of Roboute Guilliman, the rank of Lieutenant was again implemented. Lieutenants now serve under the command of Captains, acting as their right hands by providing flexibility and helping to direct their battle-brothers in engagements. Space Marine Companies are typically divided into two demi-companies, each of which is commanded by a Lieutenant.[3]

Some Chapters assign additional roles to Lieutenants; for instance in the Salamanders, they are given a ceremonial duty as bodyguards to their Captain whereas in the Iron Hands, they are charged with questioning their Captain's plans so as to probe for human error.[3]