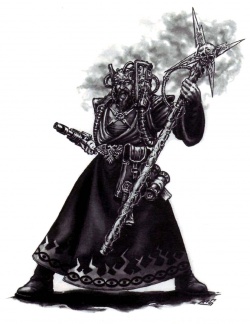 Primaris Psykers (also known as battle-psykers or psyker lords) are extremely powerful psykers in the service of the Imperial Guard.

Primaris Psykers are rare and extraordinary individuals who wield the destructive power of the Warp as a weapon to smite the enemies of the Emperor. They are capable of hurling bolts of ether-energy at their opponents, burning the foes' synapses and searing their flesh from their bones. They are viewed with a mixture of awe and fear by the superstitious Guardsmen whom they serve alongside, and utterly abhorrent to some commanders. However, their ability to combat the magicks of aliens and heretics make them valuable assets. A Primaris Psyker is usually attached to a high-ranking Imperial Guard officer who can direct the psyker's powers as the situation necessitates.

Primaris Psykers march to war in uniforms daubed with wards and sigils of power. They carry a psycho-reactive staff made of rare woods and precious metals, through which they can channel their psychic powers and transform it into a searing weapon capable of cutting through reinforced ceramite and ripping the life force from those it strikes.

Due to the constant risks of daemonic possession, a Primaris Psyker's wargear also includes several fail-safes. Complete micro-circuitry and neuro-active wiring are connected to the psychically attuned crystals embedded in the psyker's hood or collar, designed to bleed away excess Warp energy. These, coupled with cranial surgeries undergone by the psyker to implant neural inhibitors (which tend to blunt the psyker's innate power as well), and a lifetime of training, give the psyker a reasonable chance at avoiding powerful psychic enemies and resisting daemonic influences. 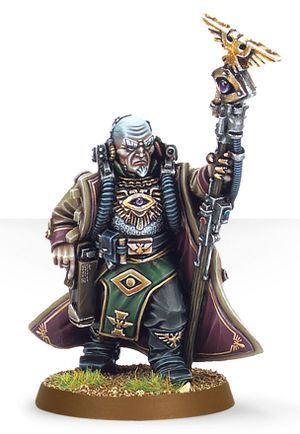