"They were forged for Mankind's darkest hour - and that hour is upon us." 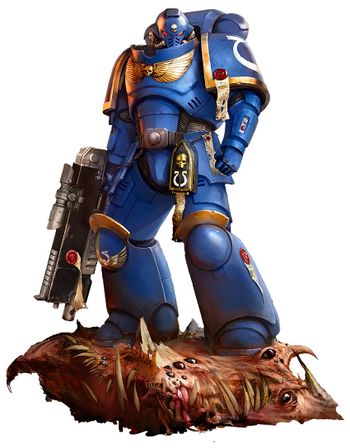 Primaris Space Marines are the next step in the evolution of the Emperor's Space Marines. Primaris Marines are larger and more physically powerful than their standard cousins, in addition to having a more stable gene-seed.[3c] These mighty warriors have appeared in the closing days of the 41st Millennium following the Thirteenth Black Crusade and resurrection of Roboute Guilliman.[1]

Primaris Space Marines have been genetically altered by Archmagos Dominus Belisarius Cawl to be bigger, faster and stronger than their Space Marine brethren. The seed of their creation lies in the aftermath of the Horus Heresy, when the Primarch Roboute Guilliman charged Archmagos Dominus Cawl with creating a new legion of warriors that would aid the Imperium in its next darkest hour. Guilliman gave Cawl the Sangprimus Portum, which allowed the Archmagos access to information regarding all twenty Primarchs themselves.[5] Cawl also used several unique STC-technologies during the process of creating the Primaris'.[8c] Nonetheless, the task would take ten thousand years to complete and now, during the Thirteenth Black Crusade when the Imperium is poised on the brink of annihilation, the Primaris Space Marines have been unleashed to fight against the Chaos hordes of the Despoiler.[1]

Tens of thousands of Primaris Marines were secretly created by Cawl over the millennia, while many more were made after the rebirth of Guilliman. Many of these were produced and held in stasis within the Zar-Quaesitor, Cawl's flagship. Half of the original batch of Primaris Marines were used to form the new Chapters of the Ultima Founding. The rest were gathered into great armies known as the Unnumbered Sons that would be gradually reduced over the course of the Indomitus Crusade through the reinforcement of existing Chapters scattered throughout the Galaxy.[3a] Roughly 94% of existing Space Marine Chapters came to accept Primaris Marines into their ranks.[3c] These marines subsequently were called The Awoken to distinguish them from the other Primaris Space Marines, created later.[8a]

The first wave of Primaris Space Marines were great reinforcements for the Imperium. But new forces were needed for defense, and therefore, under the Cawl's guidance and with the help of his arcane technology, the Space Marines Chapters were provided with technologies to create their own Primaris Marines from new aspirants. So the next generation of Primaris appeared, created from people born in the 41st millennium. These marines were named The Indocrinated.[8a]

Soon for ordinary Space Marines the question arose - can the standard space marine change into Primaris, gaining increased combat abilities, strengthening his skills for better protecting the Imperium? So the process of Rubicon Primaris was created. It is not known who the first Space Marines were to take this perilous leap of faith. Some say it was Kor'sarro Khan of the White Scars. Other believe it was the mighty Marneus Calgar of the Ultramarines. These 'remade' Primaris Space Marines were called The Ascended. But the process of remaking is perilous and not every space marine was able to undergo the complex operation - some died in the process, while others failed to ascend. Yet despite the losses more and more space marines crossed the Rubicon with every passing day.[8a] 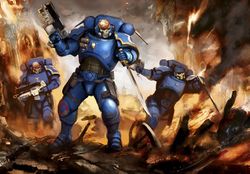 Though they are a step removed from their brothers, the Primaris Space Marines still bear the gene-seed of their Primarchs, and some dissenting voices worry how this new type of warrior will react with the known genetic quirks and flaws of some of the more unusual Chapters.[1] Thanks to the Sangprimus Portum, Cawl collected genetic samples of all twenty of the original Primarchs, including those deemed lost to history. However, Guilliman made clear that only Primaris Marines from loyalist Legions were to be produced.[3]

The Primaris Marines differ from their standard cousins thanks to three additional Implants not found in the latter: Sinew Coils, the Magnificat, and the Belisarian Furnace. The implants, plus the benefits of more potent geneseed thanks to the Sangprimus Portum[5], allow the Primaris Marines to be larger and physically stronger than previous generations of Astartes.[3] In addition, their gene-seed is far more stable and only has a 0.001% genetic deviancy per generation, avoiding the severe instability problems seen with Chapters such as the Blood Angels and Space Wolves.[3c]

Standard Space Marines can be remade into Primaris Space Marines, but early on this was not advisable as Belisarius Cawl estimated a 61.6% failure rate until the process could be perfected. While many saw transitioning into Primaris as the ultimate destiny of all Space Marines, many opposed converting and there were even whispers of mutiny at the prospect. Ultimately, Marneus Calgar volunteered to become the first known successful case of a Space Marine transitioning into a Primaris Space Marine. Despite it being an agonizing procedure, Calgar became physically enhanced and better equipped to mentally deal with the depredations of the Warp.[7] 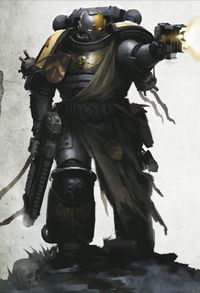 A Primaris Space Marine of the Silver Templars[8b]

To aid them in battle, these new gene-forged warriors are equipped with new arms and armour based on Cawl's designs and forged on Holy Mars itself. These include the Mk X Tacticus armour, a suit of Astartes Power Armour that combines the most effective elements of ancestral Horus Heresy patterns of plate with more recent developments in Power Armour technology, and the Mk II Cawl-pattern Bolt Rifle, which is a re-engineered, re-crafted and perfected design of the archetypal firearm of Space Marines.[1] Primaris Captains and Aggressor Squads use Mk X Gravis Armour. 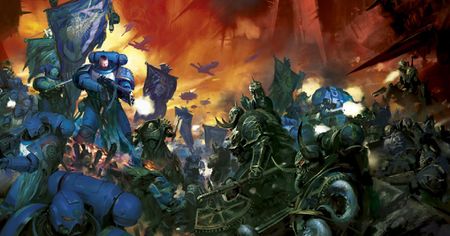