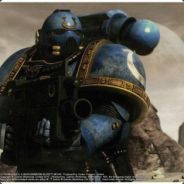 Brother Proteus of the Ultramarines was a Space Marine Scout who was promoted to full Battle Brother and assigned to the newly-reformed Ultima Squad of the Second Company, by Captain Severus.

Ultima Squad was assigned to investigate a distress beacon broadcasting from the Shrine World of Mithron. When they arrived, the Ultramarines discovered that the Imperial Fists contingent guarding the shrine had been slaughtered by Chaos Space Marines of the Black Legion.

After the Squad entered the shrine, they were attacked by a Daemon Prince, which killed several Space Marines, before plunging out a high window while grappling with Severus. Before falling, Severus threw his chainsword to Proteus, telling him to take command and lead the Squad to safety (since their Sergeant, Crastor, had already been killed in an earlier firefight with the Chaos forces). Apothecary Pythol confirmed that Severus had instructed that Proteus should take command if anything should happen to him, over the objections of Brother Verenor, with whom Proteus had a healthy rivalry.

Against the recommendations of Pythol and his Battle Brothers, Proteus decided to press further into the shrine, on the remote chance that there were still survivors of the attack. They found two: Chaplain Carnak and Brother Nidon of the Imperial Fists, both tasked with guarding a holy relic entrusted to their Chapter. While they were leaving the shrine, Verenor confided his suspicions to Proteus that the two Imperial Fists were somehow tainted by Chaos: it was too much to believe that they had miraculously survived the attack that killed off the rest of their company.

Making their way back to the extraction point, they were charged by Black Legion Space Marines. Proteus ordered the squad to rally around him and defend their position. Anticipating that they were being lured into a trap, he declined to lead the squad to an inviting patch of high ground nearby, until Carnak had incapacitated several of the charging Chaos Marines with an energy discharge from his Crozius Arcanum.

Just when the squad was about to be overrun, Severus miraculously reappeared and fought off several Chaos Marines, leading the squad to safe extraction.

Aboard the Ultramarines' ship, as it made ready to return to Macragge, Proteus confided Verenor's suspicions to Captain Severus, who confronted Carnak and Nidon. When Severus aimed his bolt pistol at Carnak, the Chaplain began to reach for his Crozius, but Proteus, suspicious, stopped him. In the moment's confusion, Severus shot Carnak dead, revealing himself to be the Daemon Prince, possessing Severus' body. The Daemon seized the relic and "thanked" Proteus for his help in ensuring that the Daemon would be delivered straight to Macragge, where it would use the relic to open a warp rift and allow an army of daemons to overrun the planet.

When Proteus regained consciousness, he joined with Verenor and Nidon (the only living or non-wounded survivors of the Mithron expedition) and followed the Daemon into the ship's Reclusiam, as the ship's engines counted down to warp jump.

At first, the Daemon easily subdued the three Space Marines, gloating over a helpless Proteus that it would remove Severus' "flesh" and use Proteus' instead for its "return" to Macragge, covering "Proteus"' name with the glory he had so coveted at the outset of the mission. The Daemon was driven back by Pythol, who had rallied enough from his wounds to enter the Reclusiam and attack. The Daemon tore off Pythol's head, but was briefly distracted by Verenor, who had regained consciousness. While it was distracted, Proteus ran to the front of the Reclusiam and tore the sacred Hammer of Macragge from its reliquary, which he used to slay the Daemon.

After it was gone, Proteus' first thought was guilt at having damaged the sacred reliquary. But Verenor, awed by his battle brother's valour, promised that he would stand alongside him when he defended his actions to the Chapter.

Some time later, Proteus was promoted to lead his own squad, with Verenor as his second-in-command.