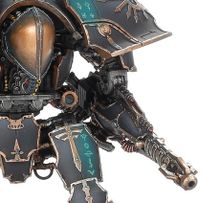 Perhaps one of the darkest and most fearsome weapons ever developed by the Imperium, this device focuses the psychic antipathy of the bounded psykers, creating a massive Warp breach similar to a Vortex Weapon.[1] This appears as a dark, faintly visible energy projectile that passes through anything in its path until it contacts more solid matter, at which point it briefly opens a breach into the Inmaterium. The effect of this is as deadly as if one were onboard a ship at warp and their gellar shield suddenly failed: regardless of the thickness of a machine's armor or power of its void shields, any protective shell simply becomes a metal coffin as warp energies sunder the body and soul.

This weapon is of immense power, able to knock down even mighty enemy titans like puppets with their strings cut. It is, however, greatly limited in that it stands a great chance of consuming bound psykers every time it fires.