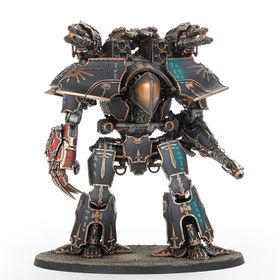 Psi-Titans are a specialized and feared class of Titan used by the Imperium's Collegia Titanica and most notably by the Ordo Sinister.[1]

In place of standard Titan configuration, a Psi-Titan is equipped with highly forbidden Dark Age of Technology-era technology known as the Ciricrux Anima. The Titan is manned by a damned Psykers surgically bound to the cockpit and locked in place against its will. They are in effect slaved to the Blank Perceptor-Intendant, which serves as the Princeps of a Psi-Titan. This unique setup allows a Psi-Titan to project psychic phenomena on a truly gargantuan scale. A Psi-Titan can project waves of abject fear, psychokinesis, biomantic leeching of life, and even temporal distortion.[1]

However the most feared and dreaded ability of a Psi-Titan comes from its Sinistramanus Tenebrae, also known as a Psi-Cannon. This device allows it to focus the psychic antipathy of the bounded psykers, creature a massive Warp breach similar to a Vortex Weapon.

The only encountered type of Psi-Titan are modified Warlords known as the Warlord-Sinister class. However other types of Psi-Titans are speculated to exist.[1]