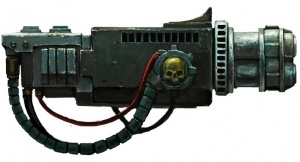 Psilencers are a type of psionic weapon created by an unknown Xeno race and made use of by the Grey Knights Chapter. Whether the technology was stolen or freely given to the Grey Knights is not known; all that is known is that it is unlike any weapon within the armouries of the Imperium. They function by channeling the psychic might of the user where it is not only focused but amplified. The unique design means that it lacks a triggering mechanism but instead the wielder channels his psychic might into the containment core of the weapon - after which, focusing crystals channel the resultant energy into a refined azure energy pulse capable of destabilizing the physical form of a Daemon.[1]