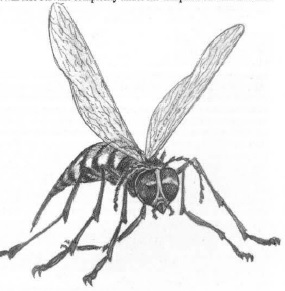 The psychneuein is a warp creature similar to a large, spindly wasp, approximately 2,5 metres long.[1]. There are two known genii of psychneuein, native to Mara and Prospero. They are also found in the Webway[5], which may possibly be their place of origin, explaining their existence on multiple worlds.

Female psychneuein are drawn to unprotected psykers and psychically project their eggs into the target's brain. No larger than grains of sand, the eggs hatch after one day of gestation and rapidly grow as they consume their host's brain. The maggots, which resemble spiny slugs[4b], pupate by nightfall and hatch the next morning[4a].

The psychneuein infesting Prospero almost caused the downfall of civilisation there until the inhabitants learned to control their psychic abilities. Even then, swarms of psychneuein still haunted the wilderness and the ruins of ancient cities[3][4a].

These creatures are sensitive to the presence of psykers and reproduce by planting eggs in their brains. Once infected, the psyker slowly loses intelligence and their appearance slowly changes until they either are killed or suffer from the Perils of the Warp, whereupon multiple psychneuein will erupt from the corpse. Psychneuein have three well-known phases - the larval phase, the adult phase and the "infected" phase[2].

Larval psychneuein are typically puny creatures, whose main strength is their ability to infect others. Injuries can trigger a sudden metamorphosis to its adult form. Their small size makes them easy to kill but they usually occur in large numbers, making an infestation of psychneuein difficult to control, particularly if there are any latent psykers around for them to infect[2].

Adult psychneuein are much more dangerous than their larval brethren: they are stronger, faster, tougher, and more perceptive than humans and capable of flight, turning insubstantial, and detecting minds. A single adult psychneuein is a significant threat to any and every nearby sentient being[2].