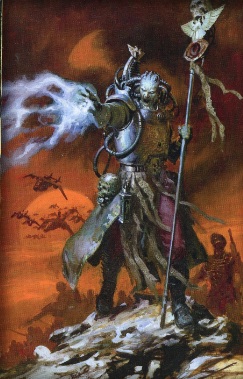 Psychic-Foci are techniques[7b] or devices used by Psykers to help them focus and enhance their powers. Devices can be sacred bones, carved wytch staves, blessed icons, crystals[7a], sophisticated devices crafted by the Adeptus Mechanicus, or something else. The most famous used by Psykers in the Imperium is doubtless the Emperor's Tarot, which helps act as a powerful divinatory tool in the hands of a trained Psyker.[7b]

Left unchecked, psykers present a potential danger to entire worlds, and much of the Inquisition's role is focused on hunting them down. The Imperium ensures psykers are suppressed, tracked down and controlled; those strong enough will be recruited into Imperial service, fulfilling vital roles in the Imperium as Astropaths and Sanctioned Psykers. The weakest are doomed to serve humanity through service in the Adeptus Astronomica, as nourishment for the Emperor of Mankind[1], or simply lobotomized and become one of the innumerable servitors, though a few someway chosen are taken away to the Obsidian Keep of the Astra Telepathica where an unknown fate awaits them.[8]

Space Marines also shun those with psychic powers, but they too make use of one unit, the Librarian. He is similarly trained, but also benefits from advanced equipment, such as the psychic hood. These advantages, coupled with his exceptional Space Marine physiology, make the Librarian more useful than the average Sanctioned Psyker.[Needs Citation] The Librarian's powers are slightly more powerful, but still nothing compared to some other races' powers.[Needs Citation]

The Squats of the Leagues of Votann have souls that burn dimly in the Warp and few amongst their kind display any psychic abilities. However, special psychoactive Cloneskeins exist that have allowed for psychic specialists to exist, most notably the Grimnyr. Using specialized Barrier-Tech, these specialists can draw forth the power of the Warp and manifest it in a manner similar to the psychic powers of other races.[12]