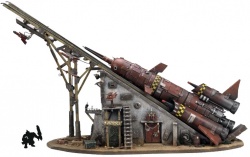 The Pulsa Rokkit is an enormous Ork Rokkit.

The Pulsa Rokkit contains a large and unstable force field generator. It is a special version of Kustom Force Field, mounted on a rocket and launched into enemy ranks. The generator is modified into a special version called a Pulsa and detaches from the rocket and slowly descends (hopefully) to the ground.

The Pulsa launches waves of energy in all directions like a stone on a pond, which sends troops into disarray as they are thrown around and vehicles flip over. Most of the time the Pulsa will burn out after one massive pulse, however on some occasions it can continue to fire.[1]

The crew doesn't need to be able to see where the rocket is going, ultimately as long as it lands somewhere in the area of the enemy is fine. Foot soldiers are knocked over and sometimes pinned to the ground, heavy weapons on mounts are often flipped over and their crews knocked down, dreadnoughts are sometimes knocked over or even have their legs destroyed, bikes and vehicles are spun round and flipped over and some terrain is even demolished, especially walls.[1]