The Pulse Rifle is the standard weaponry of Tau Fire Warriors and their Shas'ui leaders.

While about the size of an Imperial Lasgun, the Pulse Rifle is far more powerful. It fires a plasma pulse, which is generated when an induction field accelerates a particle which breaks down as it leaves the barrel.[1][2] The small circular device near the end of the barrel[3] - Gun Stabiliser[7] - is a housing for a gyroscope that is part of an aim-stabilization system that allows the rifle to remain steady on target and angled for optimal firing at distance, regardless of factors like shaking hands.[3] This helps to give pulse rifles a greater effective range than many other infantry weapons. The powercell from which it draws energy must be replaced after fifty shots.[5] Pulse Rifles can also be used by Kroot Shapers.[4] 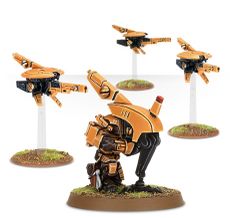 The Pulse Rifle was developed early in the Tau Empire's history, shortly after the end of the Mont'au. It was introduced during the Campaign of Scouring against the Orks, where it proved essential to victory.[6]

The Longshot Pulse Rifle is a sniper variant of the standard Pulse Rifle.[1]