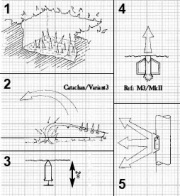 Booby traps are improvised antipersonnel or anti-tank devices, concealed within an area likely to be passed through by the enemy. Although taking many different forms, all are designed to slow or demoralize enemies by inflicting casualties and destroying armoured vehicles.[1]