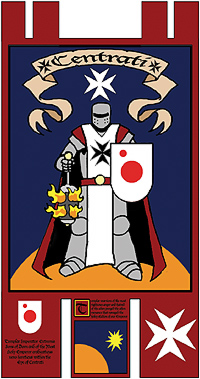 Banner of the Purging of Centrati's Eye

A Dark Eldar raiding party overtook a massive defence station nicknamed "Centrati's Eye", shipped off the station's personnel as slaves and turned its weapons on the cities of Centrati, killing thousands on the planet's surface.[1]

The Dark Eldar, however, were unaware of the presence of a Black Templars Battle Barge in orbit. The Black Templars were stationed on the other side of the planet when they received the distress voxes from the defence platform and detected the massive energy discharges directed at the surface.[1]

The Black Templars in their turn assaulted the space station and to their surprise they faced not only Dark Eldar but also Eldar forces. Both enemies were fighting each other. The Black Templars did not care about this, and engaged both Xenos races and destroyed their forces over the coming months. The space station was retaken and the planet's surface was cleansed of the alien taint.[1]