A Purity Seal takes the form of prayers or litanies inscribed onto paper and then affixed to the Space Marine armour with red or black wax usually then coated with protective sealants or for more permanence electrum casings.[Needs Citation] Often it is responsibility of the Chapter's serfs to affix purity seals.[1] They can be affixed to any part of a Space Marine's armour or weapon. Other common places include leg plates and the rims or tops of the shoulder pads. Purity Seals should also not be confused with the prayer sheets and paper litanies worn by the Black Templars, sometimes arrayed in large fluttering layers on their armour. These are specific to that Chapter and part of their own systems of faith and honour, and not taken from the teachings of the Codex Astartes.[Needs Citation] 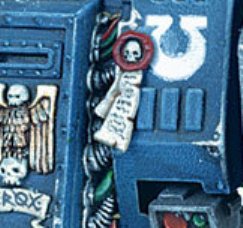 Purity seals are a mark of a Space Marine's pure faith or morality in the eyes of the Emperor of Mankind and the Chapter. Such seals are only ever awarded by the Chapter’s Chaplains, bestowed upon a Space Marine before battle as the Chaplain bestows a blessing onto the ranks of Space Marines. In many Chapters, this is a solemn ceremony accompanied by chanted litanies in honour of the Primarch and the Emperor. Such ceremonies may be performed because the ranks receiving them are about to undertake a special task or mission, or because they are not expected to survive. Unlike other Honours, the right to actually bear a Purity Seal comes only after a Space Marine has worn it in battle and proven his courage to live up to its ideals. Typically a Chaplain will bestow a Purity Seal on a Space Marine with a specific blessing, such as killing a certain foe or number of enemies for the Emperor, or for completing his duty even when mortally wounded. If the Space Marine returns successful, he has proven the blessing true. He is considered to have the favour of the Emperor and is granted the right to wear the Purity Seal on his armour permanently so that others might recognised his faith and devotion.[Needs Citation]

Each Purity Seal carries with it a different invocation of blessing as devised by the Chaplain depending on his assessment of the Space Marine's own purity. The exact nature of the blessing depends on the Chaplain, and is chosen when the blessing is bestowed. Common blessings include such things as 'no xenos blade shall piece the brothers flesh'; 'once within the brother’s sight, no enemy shall live to see another day'; or 'this brother’s boltgun shall never grow cold from firing or his chainsword dry from blood once the enemy has been encountered'. The effect of these blessings is mostly to spur the Space Marine in an effort to prove his valour to his Chapter and to the Emperor by bringing the blessing to pass, and it may even cause him to change his tactics or become reckless with bravery. A Battle-Brother can also draw strength from his Purity Seal by reciting its prayer and reaffirming his sense of duty to his Chapter and to the Emperor. It could also mean resisting some manner of subversion if it would break the nature of the Purity Seal’s blessing, granting the Space Marine another burst of effort fuelled by his unbreakable sense of honour. Finally, those that bear a Purity Seal are recognized for their devotion and loyalty, in a similar way to the Imperialis, and as a result respected for their achievements.[Needs Citation]