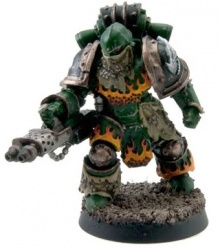 The Pyroclasts were specialty infantry within the Salamanders Space Marine Legion during the Great Crusade and Horus Heresy.[1]

Shunning conventional Destroyer units within his legion (save a small force for Xenos extermination operations) due to the unclean and tainted nature of the weapons they wield, Vulkan instead created the Pyroclasts and gave them powerful thermal-incendiary weapons of his own creation, the Pyroclast Flame Projector. To the Salamanders fire itself has almost a mystical function and truth, embodying purity, rebirth, and redemption. But for the renewal to occur, what has gone before must be purged by fire. The Pyroclasts embody the last concept faithfully.[1]

Pyroclasts wore Mantles of Ash, finely wrought artificer plates fashioned with flecks of obsidiax crystal from the volcanoes of Nocturne and draped with the hides of the Damen-Salamanders who dwelt within their fiery depths. This gave them added protection against flame weapons.[1]