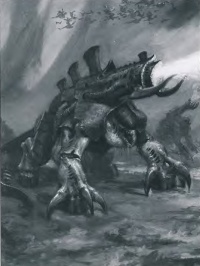 A Pyrovore is a species of Tyranid which pre-digests biomass to provide minerals and fuel for the Tyranid Hive Fleet.

A Pyrovore's body is a complex array of bladders and stomachs, driven by the instinctive need to feed, with a deadly maw dripping with corrosive acids strong enough to break down flesh, bone and armour into a smouldering mucous. They are often found on battlefields feasting on the dead and wounded, and can even devour metals and rocks.[1]

When facing an enemy, a Pyrovore can launch a searing fireball from the dorsal flamespurt bio-weapon growing out of its own flesh. If injured, the acidic contents of a Pyrovore's various stomachs spray out of its wounds over its enemies; if killed, the volatile ichors of a Pyrovore's insides have a good chance of igniting in a tremendous explosion, engulfing everything around it.[1]

A Pyrovore has limited intelligence, driven only by the need to feed. Its flamespurt weapon-symbiote has a separate brain that functions independently from the Pyrovore, unlike many other Tyranid organisms, which mind-bond with their bio-weaponry. The flamespurt weapon actually possesses a larger mental capacity than its host, instinctively attacking any nearby non-Tyranid lifeforms whilst the Pyrovore gorges itself.[1] 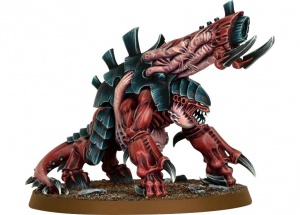