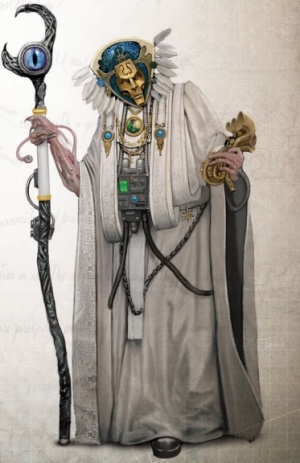 These intellectuals abandon their homes at their respective cities in order to travel and pursue knowledge. Such travellers are known to be unrelenting in their search for new and forbidden knowledge. As such, they are scholars of great renown and learning with them being great Sorcerors that are able to use their powers to heights that are normally unseen amongst Humans. On their homeworld, Magister Immaterials can either remain conduct perilous journeys between the three cities on Q’Sal cities or may even leave the planet. Though travellers, a Magister Immaterial can be a valuable asset and companion for a Chaos warband who can manage to tempt them with new lore. Normally, when they conduct their travels, they abandon any desire for political power though a rare few such individuals manage to return to their homeworld in order to become members of the upper hierarchy of their society. As a result, the ruling sorcerer-technocrats view a Magister Immaterial with both curiousity and suspicion. However, the greater majority of them that return to Q’Sal simply apply their new found knowledge to the creation of great wonders of sorcery and technology.[1a]

The nature of their studies combined with the varied culture on Q’Sal means that these beings tend to have a risk of insanity and can be mentally deviant. Typically, a Magister Immaterial has many truly unique personality traits such as conversing through intricate gestures, the collection of objects seemingly of a trivial nature, speaking lyrical rhythms and anaecdotes or even refusing to allow their feet to touch the ground. Some can be seen as strange yet quirky individuals though dark rumours speak of more sinister habits that lie beneath a façade of cooperation. Those that court these beings learn that they will only assist those that aid them in their endeavours. Any aid provided leads to a Magister Immaterial either using their great psychic abilities as well as knowledge or simply using their contacts on Q’Sal to aid their comrade. Ultimately, however, any alliance with these beings are tenous as best as Magister Immaterials are devout worshippers of Tzeentch and thus share their patron deities ever shifting nature.[1a]