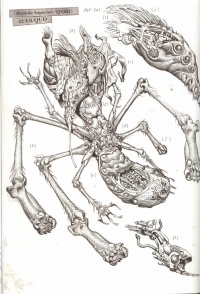 The Q'Orl, also known scientifically as Bestiola Superior, are a type of intelligent, advanced insectoid aliens that lived in the galaxy and were native to the Swarmworld Loqiit, located in the Segmentum Pacificus.[1]

Commonly held theory holds the view that the Q'Orl are the evolutionary descendants of primitive invertebrates of lifeforms native to their homeworld of Loqqit. Whilst all are born equal, there were several distinct strains that are developed within the larval nurseries. This was done so through the use of hormonal soups exuded by the queen which is responsible for siring the entirely male race by laying several thousand eggs every day. At an unknown point, they developed space travel capabilities where they created elegant chainships. In time, they developed unbelieved advanced spacevessels and became heavily armed though lacked Warp travel capability. As they expanded into space, they began placing planetary marker-stones, deep-space monoliths and archaeological sites containing a rich amount of Q'Orl text. These texts all proclaim the announcement of the "Superiority of the Swarmhood", their ownership of select regions of space and their ultimate aim conquering the Galactic hub. Their empire was known as the Q'Orl Swarmhood and they were centered around their single holy world.[1]

According to one text, four thousand years ago at the end of the 37th Millennium they became afflicted with some form of disease that may be Chaotic in origin. It is speculated that the disease was transmitted originally from Human settlers and may be attributed to Nurgle. During this time, they were assisted against this disease or Chaos by another race which some believe may be the Eldar. After the war was won, the pointy ears allied demanded payment which was a Q'Orl queen to make an "uncorroded swarm"; possibly a race resistant to disease or Chaos. This saw the Q'Orl dissolve their alliance and defend their queen though the Eldar conduct a treachorous act that steals away the queen. Despite the loss of the queen, a newly formed queen-egg was laid bringing the reign of the next matriarch though the Q'Orl never forgived the Eldar for their actions.[1]

At some point, an Administratum colony-ark along with a fleet of ships as part of a seeding project was dispatched into the space held by the Q'Orl Swarmhood. Upon learning of this, the Q'Orl became less than pleased at seeing parts of their territory being held by Human trespassers. In retribution, they massacred an estimated number of thirty thousand pilgrims before a single colony-ark managed to escape and becoming the only survivor of its fleet. During the fifth year of Explorator Mari Alitz travel of Segmentum Pacificus on St Thor's Eve, the colony-ark was encountered in the desolate region of space where they stayed for twenty days though never encountered a Q'Orl specimen. At some point, the Swarmhood began capturing a number of members of the Navis Nobilite in Segmentum Pacificus which included Corchillio Haegrael of House Hagrael who was implanted with a previiously unknown organism in his brain. In the locality of Maachros System on 0.024.804.M41, encountered the wayward frigate Macharius Memoriem encountered a Chain Ship with the Q'Orl captured Navigator that had been infested with a maggot-strain in his brain. This discovery led to increased security in Fleet Pacificus to prevent the capture of further Navigators.[1]

Their primary sensory node contained six ocular orbs each of which were horizontally paired that contained photoreceptor rods of specific primary wavelengths. There were also a trio of scent-organs with greasy cilia-layers within that connected directly to the neutral cerebral column. The primary form of communication was through form of chemical and olfactory form making direct Human interaction impossible. However, they do possess a runic language which was simple and based entirely upon a mathematical principle which relates each element of a Q'Orl's life based on a prime number.[1]

Their thorax contained a chitinous endostructure with ultra dense muscular mass that possessed eight limb structures of of which served as triple jointed perambulatory legs. The other four limbs contained manipulator extremities. The abdominal sac allows for thoracic joint which in turn provides 180 degree movement. Infused technology at the abdomen suggests a bio-mechanical port; possibly for weapons, vehicular interface or device operation.[1]

Study of the race's biology shows an ancestral evolution from primitive invertebrate lifeforms indigenous homeworld of Loqqit. They possess multiple dexterous limbs with the presence of complex bionic technology suggesting a highly intelligent as well as advanced species. It was also believed that they were a short-lived but highly industrious species. They live in vast honeycomb structures that orbit their secret homeworld which lie the bodies of the dead are lovingly deposited. Each adult can live for ten years roughly making their lives brief but fast which is reflected in their ideology. They have a sense of ancestor-worship where progress was made by continuing the half-finished projects of their forebears. The exception to this rule was the queen who lived for hundreds or possibly thousands of years. The Q'Orl believe in a form of racial glory where expansion and glory were the only justifiable outcome for the deaths of billions of their kind. This makes them a dangerous threat to the Imperium of Mankind in the future.[1]

The species were divided into numerous breeds which included warrior drones and a queen. Newer strains were customizable through the use of a hormonal soup that was fed to the developing larva. The queen herself produces hundreds of egg everyday. A newer breed was later discovered by the Imperial Navy which were small maggot-like creatures that can infest Humans or Navigators allowing them to control other races. This was one possible method of bypassing their inability to navigate through the Warp.[1]

The Q'Orl use the Q'Orl Mind Grub, resembling fat larvae, to capture human psykers, making them easier to control with vocal commands or pheromones.[2]

The Swarmhood is known to had created space vessels that are both highly advanced and heavily armed. Their ships are typically constructed with a series of interconnected-segments that allow them to separate at command into component parts. Typical tactics used by the Q'Orl is to uncouple their Chainships into separate segments in order to avoid capture which flee in different directions. These elegantly designed Chainships, however, lack the means to travel through the Warp which has restricted the expansion of the Swarmhood. This deficiency has allowed their enemies to escape their vessels by departing through the Warp. Recent encounters had seen them modify their ships with encumbering machinery that are of Imperial origin. This has led to the growing fear that the Q'Orl had begun to use captured or even salvaged Imperial warp-engines that were being incorporated into their space craft.[1]