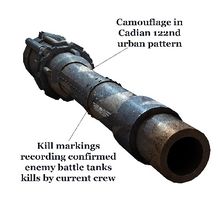 The Quake Cannon is a gigantic artillery piece mounted on Imperial Titans and Super-Heavy Tanks.

The Quake Cannon is used to engage targets at extreme range, able to hit targets from up to 24 kilometers away with acceptable accuracy.[7b] Each Quake Cannon shot contains a fragment of a planet that has been subjected to Exterminatus, drawing the contained earth-shattering power out and containing the blastwave within a Quake Shell.[4] One shot from a Quake Cannon can punch through meters-thick citadel gates and level an entire building.[7a][7b]

The Mars-Alpha Pattern Nemesis Quake Cannon[6] is equipped to the carapace of the Warbringer Nemesis Titan.[5] It is also commonly found arm-mounted on Warlord Battle Titans.[1] The Imperator class titan can also carry one or more Quake Cannon on its carapace hard-points.[2]

The Mori Quake Cannon is another pattern that can be found mounted on the arm of a Warlord.[8]

The Imperial Guard Banesword Super-Heavy tank is also equipped with a Quake Cannon.[3] 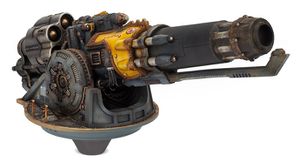