"My enemy’s enemy is a problem for later: In the meantime, they might be useful."
- attributed[1] 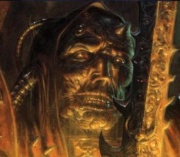 Inquisitor Quixos after being corrupted by Chaos.

Quixos, also called "Quixos the Great" and "Quixos the Bright"[Needs Citation], was a venerated Inquisitor of the Ordo Malleus who became tainted by the forces of Chaos he had sworn to combat.[3]

Before his fall from grace, Quixos was one of the most revered Inquisitors in the Imperium. At the age of just twenty-one, he had burned the daemons out of Artum. His other achievements included purging the Endorian sub-sector of its false goat-gods, transcribing the Book of Eibon, tracking down and killing the Chaos Marine Baneglos, silencing the Whisperers of Domactoni, crucifying the Witch-King of Sarpeth on the battlements above his own destroyed Hive, and breaking a sub-cult of Nurgle that had tainted one of the palaces of Holy Terra itself.[Needs Citation]

While battling a Daemon on Lackan XV, Quixos was wounded by one of the Daemon's claws, which embedded itself in his heart. As removing the fragment would kill him, Quixos decided to tap its energy to increase his already considerable psychic potential, though this had the effect of corrupting his body.[3]

Some decades later, he encountered a group called the Mystic Path on the planet Maginor, who used warp artifacts to increase demand for their products. Rather than destroying them, as most Inquisitors would have done, Quixos observed their practices and deduced that Chaos was not a corruptive influence, but rather something that was merely put to wrong ends. He built up a relationship with the Mystic Path and delivered many artifacts to them for investigation. This eventually led him into a confrontation with the puritan Inquisitor Helgrund.[3]

Helgrund and Quixos's paths crossed while Helgrund was searching for a powerful tome called the Malus Codicium, which dealt with summoning Daemons. Upon arriving on Zandrini Prime, where the Malus was held, Helgrund was dismayed to discover that the book was gone. His subsequent investigation led him to Maginor, where he battled the Mystic Path, which was now a cult under Quixos' control. Eventually, Helgrund - horrified to discover a fellow Inquisitor at the center of the Mystic Path's operations - came face to face with Quixos himself.[3]

Quixos had, by that time, channeled the Daemon Kharnagar the Deathly into a sword, created Daemonhosts for the creatures Cherubael[2] and Prophaniti, and also mastered the art of creating Soulguards, individuals who warded off Chaos. The two Inquisitors battled, blessed hammer and unholy blade clashing, each blasting through the wards the other had erected. But Quixos gained the upper hand, plunging his blade into Helgrund's stomach, causing him to immolate.[3]

In 239.M41, Quixos encountered and killed Inquisitor Hetris Lugenbrau, who had attempted to locate and kill the renegade Inquisitor, but instead shared Helgrund's fate at the end of Quixos' daemonblade. After that, he disappeared and was believed to be dead at least a century later. However, Quixos' influence remained. He manipulated Inquisitor Konrad Molitor and had him infiltrate Gregor Eisenhorn's cell to locate a powerful tome known as the Necroteuch, and also instigated a bloody incident at the Triumph on Thracian Primaris to steal the captured Alpha-plus psykers there. Eventually, Quixos was declared Heretic and Extremis Diabolus, and hunted by a cell of five Inquisitors from all three Ordos - Commodus Voke, Raum Grumman, Massimo Ricci, Titus Endor, and Gregor Eisenhorn (their leader).[Needs Citation]

The five Inquisitors tracked him down to the planet Farness Beta (right on the edge of the Eye of Terror) in early 343.M41, and brought with them an Imperial Navy ten-ship squadron seconded from Battlefleet Scarus, a detachment from the 51st Thracian Regiment, and the entire staff of Eisenhorn's Distaff. The frigates Zhikov and Fury of Spatian bombarded the table mountain Ferell Sidor (literally "the altar of the sun"), where Quixos' location has been confirmed, for a full six minutes. After this, thirty Marauder Bombers overflew the site and delivered thirty thousand kilos of high explosives. Despite this furious punishment, they encountered heavy resistance from Quixos' cult elements, who had waited out the bombardment from inside the mountain. Quixos' powerful psykers conjured a massive psychic storm, which managed to kill thirty of the forward troops, but was cut off and bottled in by the sheer number of blanks from Eisenhorn's Distaff.[Needs Citation]

During the ground assault on the mountain, Commodus Voke was killed in a psychic duel with the daemonhost Prophaniti, who was then banished by Eisenhorn along with Cherubael. Titus Endor was also seriously wounded by Prophaniti and was brought back to be treated. The surviving Inquisitors were ambushed by Quixos, who slew Massimo Rici and Raum Grumman before Eisenhorn managed to stop him. In his last moments of life, Quixos revealed that he was constructing a prototype duplicate of the Pylons of Cadia on Farness Beta, and that by amplifying the Pylons using extreme-level psykers, they could be turned into a weapon to collapse the Eye of Terror in upon itself. Eisenhorn plunged his sword into Quixos' chest, which, despite shattering upon impact with Quixos' daemon-sword, continued on and ran him through. The heretic Inquisitor fell to the floor and turned to dust, his last words being a psychic scream of "Heretic!" Quixos' ashes were subsequently launched into the heart of a star.[Needs Citation]

There has been conflicting sources as to when, exactly, Quixos lived. Some sources had him living as early as M35, while the Eisenhorn Trilogy explicitly places his activity around the first half of M41. At the beginning of the investigation that would eventually end in his death, Quixos was 342 standard years old.

Specifically, the 3rd edition Daemonhunters Codex places the confrontation between the two Inquisitors in 345.M35 - about six thousand years before the time in which the Eisenhorn Trilogy is set.[3] According to the novel Malleus, however, the battle between Eisenhorn and Quixos took place in 343.M41.