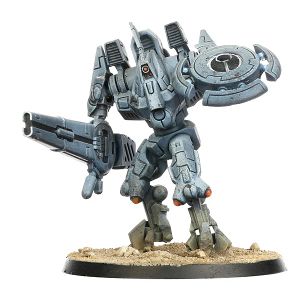 R'alai in his personal XV-9 Battlesuit[1]

Vesu'r R'alai is a famous Tau Commander and Battlesuit pilot, a legend among the grim Fire Warriors of Ke'lshan.[1]

It was his leadership and innovation that has successfully led the way in the controversial tactics associated with the XV-9 Hazard Close Support Armour, and is a strong advocate of a more ruthless implementation of Tau military force. R'Alai began his career in the Fire Caste with the Tau exploration fleets. However since the Tau Third Sphere of Expansion he has returned to lead the defense of his homeworld and outlaying colonies. R'alai is a veteran of more than two hundred engagements, famed for his lack of fear and brutal tactics that have earned him the name 'assassin'. Some however claim that he no longer fights for the Greater Good, but rather for vengeance for those he has lost. Some even suggest that within him lurks the madness of the Mont'au.[1]