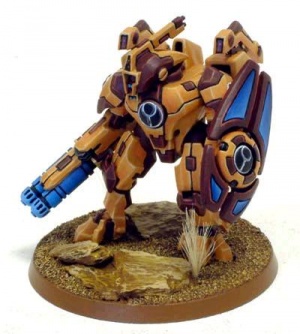 Shas'O R'myr (known as Commander Longknife), is a Tau Commander. As the Tau's Third Sphere of Expansion began under the bold leadership of O'Shaserra, Tau forces began to seek out new planets suitable for colonisation. This fresh mobilisation of the Empire's military strength required a wave of new military technology to be developed and many new leaders from the fire-caste. One such commander was Shas'ar'tolR'myr, utilising the latest experimental technology of the XV8 Crisis battlesuit. At the start of the Third Sphere expansion R'myr was awarded a command position under O'Shaserra, and was responsible for several long-range raids against human colonies and commanded the successful defence of Fi'rios against invading Orks. His growing reputation as a reliable, dedicated and tactically astute leader was sealed by his command of the Tau's campaign to capture the desert mining colony of T'ros.[Needs Citation]

Involvement in the T'ros Campaign

T'ros was a frontier world and Tau water-caste merchants had long been in contact with its planetary-governor, trading luxury goods for the planet's rare heavy mineral resources. Both sides had benefited from the arrangement, but it was just the first step in the Tau's long term plan to eventually take the planet for their Empire. When the Planetary Governor's illegal contact with the Tau was discovered by the Administratum, the Imperium's response was swift and powerful. A Space Marine strike force was dispatched to remove the governor from power and send a strong message to the encroaching Tau that this was the Emperor's world. Facing execution for their crimes, the planet's rulers turned to the Tau as an ally. Negotiations saw Tau forces invited onto T'ros and R'myr led the first secret landings. His forces engaged the Space Marines and after fierce fighting around the governor's palace drove them from the planet. Following this victory he moved against the governor himself, removing him from power and quickly disarming his planetary defence forces. He also ordered the planet's Adeptus Arbites precinct surrounded and destroyed.[1a] The planet was now under the martial rule of the Tau and the Imperium again responded, launching Tallarn Imperial Guard regiments in a counter-invasion. Fighting on Taros was fierce. For 100 days the Tau fought a mobile, defensive campaign across T'ros' savage deserts. Masterminded by R'myr the Imperial Guard forces were worn down, broken and forced to evacuate the planet with heavy losses.[1b][1c]

During the war the Imperium attempted to assassinate R'myr using an agent of the Eversor Temple. The attempt failed, but R'myr's mentor and guide, the Ethereal Aun'Vre was killed in the attack. Driven by grief and a desire for vengeance, R'myr personally led the final assault on the Imperium's landing fields, ending the T'ros campaign in a complete victory for the Tau Empire.[1c]

R'myr has sworn vengeance against the Imperium of Man for the death of Aun'Vre. The Ethereal's death at the hands of an assassin has deeply affected the commander, and as time passes his grief and hatred grows stronger.[Needs Citation]

Shas'O R'myr's personal battlesuit is the very latest development of the XV-8 Crisis suit. It not only boasts the use of a unique experimental weapon, the double barrelled plasma rifle, but also contains various modifications to the suit's defences; these include a strengthened shield generator and a modified Tau Vehicle Flechette discharger built into his suit. He is also often accompanied by a dedicated bodyguard in experimental advanced XV-81, XV-84 or XV-89 battlesuits.[Needs Citation]