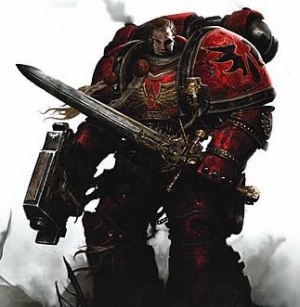 Rafen is a Sergeant of the Blood Angels Space Marine chapter. He has earned the confidence of Mephiston, the Chief Librarian of the chapter.

Rafen was born on Baal Secundus, the son of a chieftain, Axan, and brother of Arkio. The two brothers were both part of the Blood Angels trials to see if they would become Space Marines. After being challenged to a seemingly simple task by Sergeant Koris, Rafen failed and despairingly proceeded to march into the desert, expecting to die for the loss.

However, the Thunderhawk that bore Koris, Arkio and the other successful candidates was caught in a massive storm during its ascent, and crashed near Rafen's position. Rushing to their assistance, Rafen helped Koris defend against dangerous native wildlife. Having saved the Marine, Koris noted that due to losses from the crash, there was a spot amongst the candidates for Rafen after all.[1]

Since becoming a Marine, Rafen has earned the rank of Brother-Sergeant and commands his own squad. He played a prominent role in recent events of the Blood Angels, including Sanguinius' supposed rebirth and the recent assault on the Blood Angels headquarters on Baal by Fabius Bile.[3]

With the Blood Angels having won the battle on Baal, Rafen was then assigned a mission by Lord Dante to recover a phial of the blood of Sanguinius, which was stolen by Bile during an enclave between the Blood Angels and its derivative chapters. Rafen's second mission was to punish Fabius Bile with death for his transgressions against the chapter.

Having followed Fabius Bile futilely for some time on board the cruiser Tycho, Rafen receives assistance from his blood-cousin Noxx of the Flesh Tearers. Together, the two sergeants combine their squads to hunt down Bile, launching a strike against a powerful Magos of the Adeptus Mechanicus named Matthun Zellik. Zellik had been having deals with Bile, who had usurped the identity of another tech-priest named Haran Serpens, the same alias used by Bile to infiltrate the Blood Angel's on planet Baal.

The battle against Zellik took place on board the Archeohort, an ancient and unusual excavation ship manned by servitors and members of the skitarii. By taking advantage of a turncoat within Zellik's ranks however, Rafen, Noxx and their men found their way to Zellik's trophy room, where they smashed and destroyed the relics recovered by the Magos and forcing his surrender, lest his work be undone. During the battle, Rafen had lost his bolter to a trap laid by Zellik. However, among the relics and goods in Zellik's collect was a plasma gun bearing the name and chapter markings of Aryon, a long dead hero of the Blood Angels, which Rafen took to his new side arm.

With the Archeohort, the Tycho and the Gabriel (on loan from the Flesh Tearers), Rafen and his men traveled to the planet of Dynikas V, where Zellik had last done dealings with Bile. The planet itself was unusual in that it had suffered a strike by the Tyranids, but the events had left the oceans intact as well as several aquatically mutated Tyranid specimens leaderless on the planet. Sacrificing the Archeohort, Rafen, Noxx and their men descended on Dynikas V using a submersible to approach the suspected base of operations of Primogenitor Fabius Bile.

During the approach, Rafen and his allies battled large Tyranid creatures similar in size to mighty krakens. During the underwater battle, Rafen was separated from his allies and floated to the service, where mutated slaves of Bile captured him and took him to Bile's laboratory and fortress. Rafen, disarmed and implanted with a strange maggot that bound him, was taken before Fabius Bile himself. Bile, lost in grandeur, explained to Rafen his plan to clone none other than the Emperor himself. Though wounded and weakened, Rafen managed to assault the Primogenitor, and kill him by tearing out his neck.

However, Bile was not dead. Immediately after the assassination, Rafen was forced into a strange arena where he raced against mutants and other captured Space Marines of other chapters, lest he be killed. There, amongst the audience, Rafen saw Bile alive. During the race, Rafen convinced the morose Tarikus of the Doom Eagles to side with him in an uprising against Bile. During this time, Noxx and the remaining men under his and formerly Rafen's command made landfall against the fortress. It was then that Ceris, a Librarian in Rafen's squad, mentally contacted Rafen and bade him to attack a strange warp signature to prevent Bile from escaping. The warp signature turned out to be a captured and harvested Zoanthrope, whom Bile bent to his will to create warp portals and ward away the Tyranids on the planet. Curiously, the Zoanthrope welcomed its death by Rafen's hand.

During the ensuing battle, Fabius Bile was killed no less than four times, and the truth was revealed when Rafen and a handful of his allies encountered two copies of Bile at once: They were merely clones of the true Fabius Bile, who was not even on the planet. Still, the last clone of Bile did possess the coveted vial of Sanguinius' blood, which Rafen managed to take from Bile and inject into himself to defeat him. By exploiting Bile's last ditch escape attempt, Rafen and his men and the former Space Marine slaves managed to teleport away from Dykinas V while the Tyranids ravaged the the fortress.[4]

Rafen's fate as of the completion of his mission is currently unknown. He is alive, but the terms of mission are left to interpretation by Lord Dante.

The following is a list of Blood Angels who are currently serving under the command of Rafen.