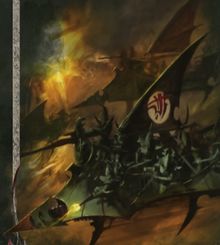 Raiders are the main transports of the Dark Eldar. Fast but very lightly armored, they are highly vulnerable to enemy infantry, even those who are not primarily tank hunters.

They use advanced anti-grav technology powered by compact turbo engines[1] to move swiftly across the battlefield, commonly used to rush the enemy, or to capture territory and are relatively versatile. They are also equipped with aethersails to harness the energies flowing from the Webway Portal from which they descend. They are commonly seen carrying a group of around ten Dark Eldar Warriors into battle, which deploy rapidly to provide numbers in an assault. Raiders are usually highly customized depending on which Kabal they belong to, often adorned with insignia and the body parts of conquered victims.[1]

Once enemy forces have been vanquished, it is common for the last survivors to be chained or impaled to the Raider. Those Dark Eldar who have died in the raid are also carried back to Commorragh in a bloody heap, showing the lack of dignity and respect the Dark Eldar treat even their own kin.[1]